Co-op News Winter 1987 PDF
HAPPY BIRTHDAY TO US!
The Co-op celebrated its 10th Birthday in 1986, and a rousing evening of entertainment and dancing was held to honor a decade of hard work, steady growth and cooperative spirit.

Blue Heron also baked a cake (complete with ten candles) which was passed slowly to the center of the crowd of about 200 people, where the entire group summoned their best wind and blew out the candles after singing “Happy Birthday to Us!” The small cake was stretched to serve all who attended the event.

Staff member Cindy Collard said the atmosphere had the feeling of “family, a down-home good time.” At the end of the party, the remaining members (150 to 200 people) gathered into a large circle, and held hands for a few minutes. They then raised a rousing shout to the ceiling in celebration of our Co-op community. Cindy mentioned that the good cheer even spread to clean-up – while no cleanup crew had been organized, about 50 people volunteered to quickly clean the room.

The party was such a success that plans are already in discussion for next year’s event. The 11th year party will probably be a fundraiser for a local organization such as the Food Band or another human services group.

Thanks to all who attended and made the 10th year Birthday Party a success, and a special thanks to the many folks who have worked to bring the Co-op through its first decade. 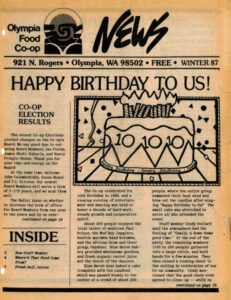