Olympia Food Co-op began as a tiny storefront in downtown Olympia in winter of 1977. Located at 121 Columbia Street, near the corner of 4th Ave., the storefront was the natural outgrowth of the strong network of food buying clubs in the area. The founding group remodeled the inside of the space themselves, with the help of community volunteers and lots of recycled materials. For reasons that remained shrouded in mystery for this historian, the “Food” in “Olympia Food Co-op” was originally an acronym that stood for “Fourteen Ounce Okie Dokie”, hence the Fourteen Ounce Okie Dokie News. 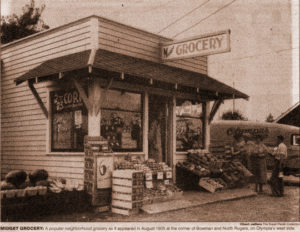 In 1989, the building owners confronted us with the “Buy it or we’re selling out underneath you” option, and we decided to buy. After we raised nearly $75,000 in member loans for the buyout, the owners came asking for a renegotiation rather than an immediate cash-out, so we cut the interest rate by 5%, and by 1993 owned the property free and clear.

As the overcrowding escalated in the early 1990s, we formed an ad hoc committee to help chart our future. After a year of member meetings we held that fateful ballot in 1991. The members had a range of options, from “Do nothing” to “Move to one large location” to “Open a second store”. You can probably guess the results. Some 655 out of 800 voted for the second store, and 500 of those 665 wanted it to be on the east side of town. The second store opened on April 1, 1994. Again, the remodel (from RV store to food co-op this time) was done with lots of elbow grease by staff and volunteers, and lots of recycled materials. A favorite piece of our legend is how we paid $25 for the salad bar! 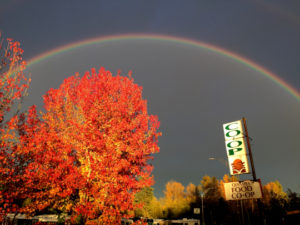 Now, well over a decade later, both stores are thriving. They’ve developed their own unique characteristics and loyal shoppers. We find ourselves again having grown to the point of stretching our seams!

Co-ops are a wonderful thing, partially because they reflect their home communities. Each one can shape its contours to fit the needs. There is no singular correct route for success; success can be measured in a multitude of ways. At Olympia Food Co-op we frequently do things a bit differently then the trend. Whether we’ve survived through karma, hard work, or just plain dumb luck, it’s been a great forty years, and we hope you’ll join us for the next 40!