Co-op News Winter 1985 PDF
INTRODUCING NEWEST STAFF MEMBERS AND… GRACE COX
Born a Dallas Cowboys fan in 1951, Grace quickly switched loyalties in 1975 when the Seattle Seahawks joined the NFL. She was 9 for 13 in Wave participation at the Seahawk-Raider game December 22, and is slowly recovering from the devastating loss to the Miami Dolphins.

Grace owns the only purple sheet metal stand-up bass in town, and calls the Citizens Band (of which she is a member) second only to football among the loves of her life. Grace is well-suited to her job as a staff member at the Co-op having been exposed to food at an early age, and also possesses an extremely well-developed glarpo* (see photo). She firmly believes it is possible to be a good person and still have a messy room.

When asked for what one thing she wants to be remembered, Grace replied without hesitation, “It would have to be my Cousin It imitation.”

*glarpo (glar po) n. the juncture of the ear and skull where pencils are stored. 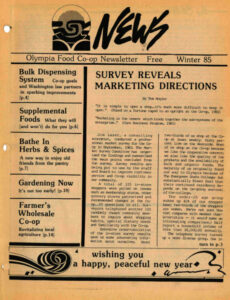