Co-op News September & October 1977 PDF
A FEW PLUGS FOR UGLY PRODUCE….
Just a reminder of the tremendous indoctrination we’ve all received which condemns any dirt or bug. We’ve been taught to see “good” fruit as that which is “orange orange” and “yellow yellow”. Meanwhile, we are guzzling much dyes, insecticides and other most probably harmful and/or carcinogenic chemicals which are applied to such fruit to maintain its beautiful unscarred appearance and to obtain (much of the time) such true (?) colors! So I merely want to relate to your consciousness, which you relate to on one level or another….. to remind everyone that UGLY PRODUCE means no dyes, no insecticides and no killing energy or “bad Karma”. A lot is locally grown. Thus, it is CHEAP and GOOD. So often, however, we see it sitting and going bad because it is ugly. Can we retrain our eyes at such a late time in our lives? Sure we can!! THINK ….. AWARENESS!! Turn a friend (as well as yourself) to a brown banana or a dull yellow speckled pear. They aren’t over-ripe or “bad”. They are merely “ungassed” bananas and “unsprayed” pears. And they are delicious!!! ENJOY!!!

SING ALONG – to the tune of Bob Dylan’s “Don’t Think Twice”
There’s lots of groovy people at the co-op
hoping you’re coming down real soon
They’re in the back room bagging up the cashews
and they’re saving you the prunes
It only costs 5 bucks to come and join our store
that gives you a discount and a whole lot more
You don’t have to shop at Safeway anymore
Don’t think twice, ‘cuz it’s alright
(soon to be released on record and tape) 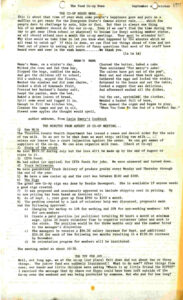