Co-op News September 1994 PDF
THE GREEN STAR AWARD
Every morning, I hear the crash of glass outside my bedroom window. It’s not a car accident or a demolition crew, it is the sound of a local restaurant bar’s bottles being dropped into a dumpster. Living downtown or owning a business downtown means no curbside recycling. Residents of the downtown core must either take their recycling to a center like Top Foods or pay someone to pick it up. Many businesses pay to have this service performed, and in a way, my neighbor who sends all of his used glass to the dump pays, too. Knowing that all over Olympia people are painstakingly going to the effort to recycle, that daily sound of bottles breaking seems like a violation of the community spirit.

Peter Guttchen, recycling coordinator for the City of Olympia says, “It’s a matter of businesses choosing not to recycle, or not being aware of the opportunities. If businesses call the city, we can guide them to commercial recycling companies.”

There are businesses who have taken the task as a challenge. They are going the extra mile to reuse and recycle, and they are using their own resources and personal energy to make it happen. When you go out to eat or to buy goods in any store, you “vote” with your dollar. Wherever you plunk that greenback down, you are saying, “I support the continuation of your business and your business practices.” To help the Olympia area “voters” make good solid decisions, we have created the Green Star Award, for businesses that deserve recognition as positive, earth conscious establishments.

The first Green Star Award goes to The Smithfield Café, 212 West Forth Avenue. Owner S.J. Boyle bought the Smithfield in 1985. Originally called The Intermezzo, this café brought the first drop of espresso coffee to Thurston County back in 1977. A longtime favorite haunt of Evergreen (State College) students, artists, political activists and the avant garde, the Smithfield is an institution in the alternative community of Olympia.

Everybody knows the lore about the place … in its early days it was a gathering place for radical feminists and lesbians, and over the years it evolved into the hub of the “punk” scene. In the mid eighties, the Smithfield was a smoke filled haven for the new wave; a sea of black leather and mohawks with a few diehard dress for success caffeine junkies peppered into the crowd.

Who knows what’s going on there now? There are still people who won’t go in because of the smoke, and it’s been a nonsmoking establishment for over five years. Who knows that S.J. has a Masters in Nutrition from Harvard, and prepares some of the most nutritious vegetarian fare in Olympia, including vegan options? Who knows about the recent inside renovation, which left the place repaired and repainted? Well, now you know.

The reason the Smithfield was selected for the very first Green Star Award is the massive effort that is taken there to recycle. Every piece of paper, glass, and plastic used in the operation of the café is recycled. No big deal, you say, lots of places do that. But do they really? Investigate further and find out. If you find commercial places that do a first rate recycling effort, nominate them for a Green Star.

What is truly unique about The Smithfield is that they also compost all of the kitchen scraps and food left on people’s plates. The well meaning customer at the Smithfield will try to scrape their food scraps into the garbage, only to be stopped by an employee who transports the organic stuff back to the compost bin. Where does he take all of these melon rinds, coffee grounds, half eaten orders of nachos and soggy chips? I ask S.J., and he described the work. “Three times a week, we load this bin into the back of my truck, and I take it out to the compost pile at the organic farm (Evergreen State College). What makes it an effort is that the stuff accumulates constantly. If I get away for a vacation and my truck isn’t here, it requires a lot of creatively on the part of my employees to keep the process going. It isn’t a choice. We are committed to composting and recycling. We do not have a dumpster anymore, just 1 or 2 regular garbage cans. My garbage bill has gone from $200 to $68.”

What’s on the menu for vegetarians on a budget? Everyday there is a freshly made soup and a variety of salads available, along with a number of sandwiches and side dishes like hummus or quesadillas. The all time favorite dish of the Smithfield is the burrito, which is guaranteed to fill you up for not much more money and give you the complete protein and carbohydrates to get you through the day.

Don’t forget to try Eggs Espresso. Steamed on the want of the espresso machine, these fluffy eggs have never seen a drop of oil. For breakfast, lunch, or dinner, The Smithfield is a healthy (and ecological) place to eat. 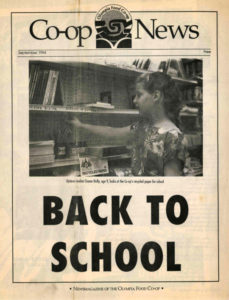