Co-op News September 1978 PDF
FINANCIAL HISTORY
The financial crisis the Co-op has been going through actually started when the Co-op opened in March, 1977. The Co-op started several thousand dollars in debt, from initial start-up expenses and the initial inventory. The Co-op started with a 15% mark-up over cost, and then later gave a 5% discount to working members and senior citizens. Starting September 1, 1977, the mark-up was raised to 10% working, 20% non-working and 32% non-member. But during this whole time no one really knew if the Co-op was making or losing money.

The staff did not have the time or expertise to set up and operate a work-able bookkeeping system. When the bank account got low and checks started bouncing, we would borrow money, which would stop it for awhile, and continue to muddle on. In March, 1978 we finally hired a real bookkeeper – who then found we were losing about $1,000 a month. There was initial panic, as some people wanted to raise the mark-up immediately and others were afraid of what the members should say if they found out we were losing so much money. We finally decided to wait another month until we had another month’s figures to base a decision on. Then the whole thing got stuck in the mud of cooperative process, and it was July 1 when the mark-up was finally raised to 15% and 30%.

By that time the Co-op was deeply in debt. At the end of June we could not come up with the sales tax money we had collected for the state in May. This money was in effect a floating loan: we would collect it for the month, and then pay it to the state at the end of the next month, in the meantime collecting another month’s worth of sales tax. So we had between one and two thousand dollars of the state’s money in our bank account. This money had gradually gone out to pay other expenses (remember, we were losing $1,000 a month) so when the sales tax ended, July 1, we weren’t collecting the money any more and had to pay the state May’s and June’s tax – about $2,000.00. This money had to come out of the store’s operations, which put us in severe financial crisis.

When people found out about the crisis, they responded with loans that alleviated the day to day crunch – but the long-term crisis is still there and still as serious as it was then. The Co-op has been through several crises, each one worse than the last. It’s the time we learned our lesson and dealt with it. If we wait for another one to hit, it may be too late. 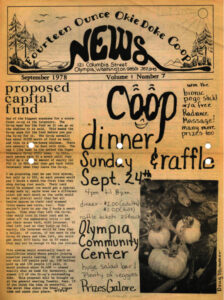