Co-op News October & November 2013 PDF
LABELING GM (GENETICALLY MODIFIED) FOODS: LOCAL FARMERS REACH OUT TO CO-OP MEMBERS
So much is determined by seeds – a plant’s vigor and suitability to our soils, climate and palates. Seeds which are reproducible and adapted to local conditions are essential to the development of a truly sustainable agriculture. Yet, we, small farmers, are vulnerable to inadvertent contamination of seeds that are our common heritage – improved and passed on since the earliest farmers began to grow, save, and trade them. For instance, Monsanto’s genetically modified Roundup Ready canola and beets not only readily pollute organic and conventional varieties, but also cross pollinate with weeds creating “Super Weeds” resistant to the herbicide, just as the genetically modified seeds were designed to be. For these reasons, Oregon’s governor signed a law in August 2013 banning genetically modified canola from the Willamette Valley. Should voters approve I-522 for labeling of genetically modified foods in Washington this November, the northwest will undoubtedly be on the forefront of setting conscientious food and farming policies.

The risks to our natural environment are palpable when one ponders about the enormous scale at which genetically modified crops are grown. For example, Department of Agriculture statistics show that in 2013, 90% of all corn grown in the United States, more than 87 million acres, was genetically modified corn. A significant proportion is Bt corn, a genetically modified variety that produces a protein found naturally in soil bacteria. As the millions of acres of Bt cornfields increased, so have root worms increased their resistance. As a result, more insecticides are used, as discussed in the National Public Radio story, As Biotech Seeds Falter Insecticide use Surges in Corn Belt. Impacts to the neighboring ecosystems have just begun to be studied. In Proceedings from the National Academy of Sciences, researchers published their findings regarding the impact of Bt corn on head water stream ecosystems: “Our results indicate that Bt corn byproducts may have negative effects on the biota of streams in agricultural areas.” (more #4) Not surprising.

So, why vote for labeling genetically modified foods? We deserve the right to know. The benefits vs. risks of eating genetically modified foods are a personal question. Many of us seek qualities in our food such as color and ripeness that can be easily observed. Yet, there are underlying traits such as nutritional composition, potential for allergenicity, and ecological footprint that can only be perceived if our food is labeled. So please vote YES on I-522! 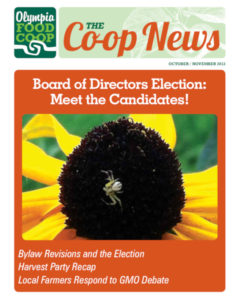