SHOULD THE CO-OP ACCEPT CREDIT & DEBIT CARDS?
The Co-op does not accept credit or debit cards for payment. Back in 1999, we did extensive research to explore whether or not we should add this option at the cash registers. At the time, the costs seemed too exorbitant to justify the convenience for the few shoppers who would use it. Instead, the Co-op decided to serve the needs of purchasers with plastic by installing ATMs. Since then, the world of commerce has changed, and we’ve heard more and more shoppers asking us to reconsider our decision.

The staff has researched many aspects of what this change could mean at the Co-op. We’ve “picked the brains” of folks who work in over a dozen other Co-ops where debit and credit cards are accepted; we’ve met with representatives from several companies who offer these merchant services; and we’ve had lots of discussion between the Board, staff, and finance committee to try to determine what direction would be in the best interest of the membership and the organization. Ultimately, the Board decided that they wanted to get some advice from the membership before deciding whether or not to “go plastic.”

There are many details involved in this prospect, and there is a lot to know. Regardless of what the Co-op decides to do, these are issues that most merchants face, and as consumers, it can’t hurt to know about how these sides of commercial activities operate. I will attempt to explain the details as thoroughly as possible, and pro and con statements will follow. Then we will ask for your participation by collecting your advice for the Board to help them decide which direction you think we should go.

How It Works
Here’s what happens when you use your credit or debit card to buy something in a store: First, your card number is scanned, swiped, or entered into the store’s system. The store has a contract with a data processing company to process retail transactions. The data processor sends and receives information electronically (by phone, internet, or satellite) between three places: the cardholder’s bank, the Federal Reserve Bank, and the store’s bank. After the card is swiped, the availability of funds or credit for the card is checked. If the funds or credit are there, they are withdrawn or debited and sent through the Federal Reserve Bank’s Automated Clearing House. Then the funds are transferred to the store’s bank account.

Data Processors and Fees
In order to provide this service, the store has to enter into a contract with a data processing company to process the transactions. Data Processing contractors act as intermediaries between the cardholder’s funds and the store. Data Processors make their money through fees that are paid by a combination of the store, the card issuer (usually a bank or a credit union), and the cardholder. The fees are a combination of flat (per transaction) and percentage amounts depending upon the type of card used and the contract between the merchant and the data processor.

Rules and Limitations
The “Big Two” in the world of Credit and Debit cards are Visa and MasterCard. If you have a debit or credit card, chances are pretty good that one of these logos appears on it. Since the whole reason for accepting plastic is convenience, these are the cards that the Co-op is considering accepting. Visa and MasterCard do not allow stores to pass the fees along to the cardholder. The fee expense must be paid by the store, and all contracts with data processors specify this. This cost would become one of the Co-op’s operating expenses and would need to be considered in our annual budgeting process.

How Much It Costs
The figures we heard from other co-ops show that between 40 – 70% of all sales are paid for with cards. The data processing companies charge around an average of 1.5% in flat and percentage based fees. If we were to reach $9 million in sales in 2006, and 55% of those sales were paid for with cards, the fees would have been around $74,000. This expense will grow as our sales grow. If we decide to go for it, we will need to include the costs in our expense budget, and the entire budgeting process would need to adjust for it. In a nutshell, this would mean increasing revenue or decreasing expenses to achieve our budget goals.

The Problem
The complicated part is the philosophical issue of the Co-op budgeting to spend upwards of $80,000 on data processing fees. These fees have become a widely accepted cost of doing business in the 21st century, but the Co-op is not your typical business! Once we start taking them, it would be hard to imagine that we would ever stop. This means that by going forward, we would be committing to a new, permanent annual expense. Although many members have asked us to take plastic, we want to give the membership an opportunity to consider the behind-the-scenes impact of this decision, and to give your opinion before the Board decides whether or not to begin accepting plastic. 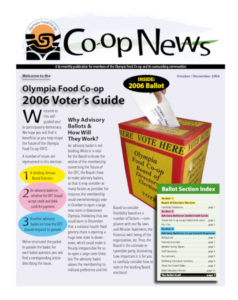