Co-op News November 1997 PDF
EDITORS NOTE
As press time drew near, and I still hadn’t written my column, I searched my thoughts for what message I wanted to share in this “holiday” issue of the Co-op News. In past years, we have written articles about what you can purchase at the Co-op as you buy your holiday gifts, and we have written pieces about the pre Christian symbols which still remain as icons of Christmas and New Year. We have provided suggestions on how to “wrap” your presents in baskets or other containers that can be used again, rather than using wrapping paper which immediately becomes waste material after the unwrapping. (I know, there are those of you who carefully unwrap and reuse the paper. I try to do that, too.)

But my point is, that in the grand scheme of the Co-op’s mission and goals, the concept of diversity and honoring all cultures on this planet has become more and more prevalent in our thoughts, in our newsletter articles, and in our trainings and staff & worker discussions. And, in that spirit, the time has come for us to look back into history to see where some of our traditions truly began. This historical searching can give us truth, which can allow us to move forward in a way that embraces the responsibility of creating new traditions which honor what really took place instead of the fairy tales that permeate our popular (commercial) American culture.

The following piece was given to me by staff member Gary Galbreath. I know that it has influenced my way of thinking about the fourth Thursday in November, and I want to share it with you.

“throughout the u.s., thanksgiving is celebrated by millions of families. they gather to feast and most are unaware of the true history of the holiday. america’s schools have taught many americans that the coming of the pilgrims made everyone happy. in reality, it was the beginning of the longest war in the u.s.; the extermination of the People.

thanksgiving day was first proclaimed by the governor of the massachusetts bay colony in 1637 to commemorate the massacre of 700 men women and children who were celebrating their annual green corn dance in their own house… gathered at this place of meeting, they were attached by mercenaries, english and dutch. The People were ordered from the building and as they came forth they were shot down. the rest were burned alive in the building … the very next day the governor declared a thanksgiving day. for the following 100 years, every thanksgiving day ordained by a governor was to honor a bloody victory, thanking god that the “battle” had been won.”

Can we move into another century without rethinking our national holidays? We must admit the atrocities of the past and move forward toward healing by taking responsibility for our actions in the past, present and future. Thanksgiving is coming up. What will happen at your table that day to begin the healing revolution? 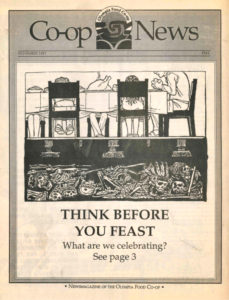