Co-op News November 1977 PDF
TOWARD BETTER, MORE LOVING CO-OP MEETINGS
Every month or so since the CO-OP began, a General Membership Meeting has been held to make important announcements and come to decisions on important issues. There have been, in addition to general meetings, biweekly business meetings held on first Mondays and third Tuesdays of each month to discuss on-going business and reach decisions on lesser issues. This meeting plan sounds like a good one and it is, but it has had some problems. What seems to have happened is that the bi-weekly business meetings have diminished in interest and attendance. Because of this, more and more issues and announcements have been put on the general meetings where, hopefully, there would be more membership participation. The result of this has been that we end up with two and a half hours of general meeting time-…..to take care of 7 or 8 announcements, each requiring question/answer time plus three to five major decisions, each of which could take up an entire meeting to be thoroughly discussed. What is happening is that general meetings have become so intense and frustrating that people don’t like to come back to them, understandably.

Fortunately there are some good suggestions for what can be done about this situation. The by-laws of the CO-OP state that in order for any changes to be made to the bylaws, a general meeting must be announced at least two weeks in advance & a quorum of 20 members must be present to vote on the proposed change. Since at every general meeting at least 2 or 3 of the issues call for bylaw change, the suggestion has been made to limit general meetings to these issues and possibly limit the number of issues discussed at any one meeting to three. All issues not requiring bylaw change would be brought up for decision at bi-weekly business meetings and bring the general meetings down to a level of intensity at which good, reasonable decision making can occur. Hopefully, a fringe benefit will be increased attendance at all meetings. Here are some more suggestions for dealing with the problem of too high intensity/frustration at all meetings;

1) Begin each meeting with a moment of silence. This will give each person a chance to get calm and centered and bring the intention of the group together.

2) Have facilitators who are not staff members. Most issues and announcements originate with staff since we are most involved with the CO-OP. A good facilitator should be able to remain impartial to the issues, should not be motivated by the need to offer her opinions. It is impossible for staff members to keep this stance since so involved.

3) Have the facilitator make some opening statements about the meeting process… reminders about mutual respect, attention, time limits, ect. Sometimes, perhaps a poem or appropriate quote might accomplish this.

4) For highly charged issues, we might go to a council format. We go around the room, each person has a turn to say their piece on the issue… while a person speaks, there is no interruption…there is no reaction, discussion, or argument until every person has had an opportunity to speak. It is important in this format that people say what they think, not to react to what others have said. I have been in meetings where this for mat has worked very well and it is a wonderful exercise in patience. (It is also a method used in many democratic ‘primitive’ tribal groups…editors note)

Cooperative decision making is not simple. It requires far more time, participation, and energy than would the delegation of responsibility to individuals. There are many of us that feel that the extra effort is well worth it for the coop movement would have died long ago instead of growing as it has. Meetings are our forums, be they meetings of the membership, the staff, the board of directors, or the committees. In may respects, the process which develops and changes in our meetings is the best gauge of how successful we are at being cooperative, at working together for the good of us all. We have learned a lot. We have a lot left to learn. For me it is no doubt that it is worth every bit of effort, frustration and struggle to come to a point where I can see that the cooperative process is working better than it did before, that we have been and are learning and growing together.

Love and joy to you all, Beth

Hi-
For a brief while, our CO-OP had a ‘Children’s Corner’ where one could drop one’s little one(s) and have a few moments of leisurely shopping. The lures were toys, book, crayons and, that magical ingredient; other kids. Now, instead, we have a new cooler, and though I do appreciate it, I miss the children’s space. Until that wonderful day when the CO-OP expands and moves to a new location with plenty of room (dream on) maybe we could all take a look at what it can really mean to have children around…….even if one may not have children, or has decided to never have any, the experience of childhood belongs to all of us. Whether it was an enjoyable adventure, or one that you barely survived, we all did manage to pull through. It seems to me that every time anyone interacts with a child, they have the chance to add a little something…either positive or negative…to the little one’s experience. Now, I agree that babies wandering freely around the CO-OP floor aren’t really convenient..but until we have a place to put “them” , if everyone felt involved enough to keep an eye out, just a little bit, the whole scene would proceed much smoother… for everyone…..so…..when you spy a kid, knee deep in the honey call someone…tell daddy or mommy…Don’t just walk on by and breathe a deep sigh glad that the bother belongs to another! 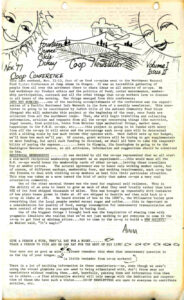