Co-op News May 1978 PDF
EVALUATIONS, VISIONS AND GOALS
The Co-op has been open for over a year. It has played an important role in the Olympia community by supplying a basic need; good, cheap food, within a community owned, co-operative framework. The Co-op has given many people an opportunity to work with one another and help shape our community. An essential part of this kind of process is to regularly take the time to evaluate the work which has been done, share our hopes and visions for what we could do, and set some realistic goals for where we would like to be in one year, or five or ten. Towards this end, four workshops have been scheduled for early June. The first will be for sharing feelings, ideas, and dreams about the Olympia community. The second will be a discussion of the role of the Co-op in this community. The third will focus on the Co-op itself, its internal process. The fourth workshop will be a wrap-up to bring together the most important ideas from the first three and to discuss viable goals. Anyone who is interest is welcome to attend any, or all the workshops. All workshops will be held at Radiance Herbs and Massage on 4th Avenue from 7:30-10:00 on the following evenings: 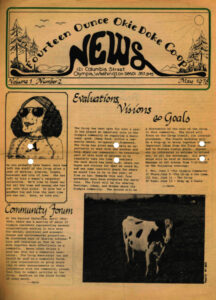