Co-op News June & July 2013 PDF
FOOD: SECURITY OR SOVEREIGNTY?
When I think of “security,” I think of deadbolts, the faux cops that patrol parking structures, alarm systems, and the Department of Homeland Security. Perhaps the meaning has been hijacked in the previous decade, but it’s not a word that makes me think of dinner. And that must explain part of my reluctance to embrace the term “food security”, which has been used in international agricultural development for roughly forty years and has recently enjoyed a revival in describing individual families’ access to food.

It turns out that a lot of people are uncomfortable with the concept of “food security”, which was defined (in 1991, by the Life Sciences Research Organization) as “sustained access at all times, in socially acceptable ways, to food adequate in quantity and quality to maintain a healthy life.” The problems with the concept are tucked away in the details of that definition: what does “socially acceptable” mean? What defines “quality?” And who gets to decide the answers to these questions?

Overwhelmingly, the answer to the latter has been governments and corporations, and the results have been farm subsidies that support big corporations over small farmers, a proliferation of untested GMO crops, “free trade” international markets for staple foods that have put local farmers out of business, and other food policies that attempted to solve the problems of hunger and famine from the top down. And that’s why, in 1996, a worldwide coalition of “peasants, small and medium-size farmers, landless people, women farmers, indigenous people, migrants and agricultural workers” called Via Campesina coined the term “food sovereignty.”

“Food sovereignty is the right of peoples to healthy and culturally appropriate food produced through ecologically sound and sustainable methods, and their right to define their own food and agriculture systems. It puts those who produce, distribute and consume food at the heart of food systems and policies rather than the demands of markets and corporations. It defends the interests and inclusion of the next generation. It offers a strategy to resist and dismantle the current corporate trade and food regime, and directions for food, farming, pastoral and fisheries systems determined by local producers. Food sovereignty priorities local and national economies and markets and empowers peasant and family farmer driven agriculture, artisanal fishing, pastoralist led grazing, and food production, distribution and consumption based on environmental, social and economic sustainability. Food sovereignty promotes transparent trade that guarantees just income to all peoples and the rights of consumers to control their food and nutrition. It ensures that the rights to use and manage our lands, territories, waters, seeds, livestock and biodiversity are in the hands of those of us who produce food. Food sovereignty implies new social relations free of oppression and inequality between men and women, peoples, racial groups, social classes and generations.”

In short, food sovereignty recognizes the many issues that come together around the food that nourishes our bodies, families, and communities. Instead of panicking at the extent of these interlocking “problems,” it embraces the multiple opportunities we have to grow connections and make a difference.

In the five years that I have worked at the Olympia Food Co-op, one of the most often expressed concerns is that our mission is too broad. Our goals range from making good food accessible to more people and supporting local production, to supporting democratic process and efforts to foster a socially and economically egalitarian society. It’s a valid concern that, for an organization of our size, our mission might stretch our resources too thin and dilute our power to change any single thing in favor of attempting to address many things. But it’s also true that the broad approach of our mission statement embodies the holistic approach that the food sovereignty movement demands. Environmentally sustainable production can’t be separated from the rights of workers in the fields, which can’t be separated from immigration reform or the right to form unions. The support of locally produced food cannot occur without acknowledging the difficulties that low income families and families of color face in sharing that bounty, and those barriers can’t be addressed without understanding the history that created them. The right for consumers to control what’s in their food (and who is producing it and to what standards) can’t be separated from the struggle of America’s indigenous peoples to have the history of the land that food is grown on recognized, and their treaties upheld. By acknowledging and encompassing these connections, our mission statement was ahead of the curve when it was first created and continues to grow in relevance as more movements connect across political and national boundaries. And as a cooperative, whose members control the organization that supplies their own food, we put food sovereignty into practice with our very existence – as you do when you vote in Co-op elections, and shop in the stores.

The lesson of the food sovereignty movement is not that we face an overwhelming situation with so many strands that we despair of ever untangling it all. Instead, those strands are pieces of a weaving that each of us hold one or two of. In acknowledging the many threads and working together, we rebuild more resilient and diverse food systems that nourish our whole community. That’s the beauty of food sovereignty. 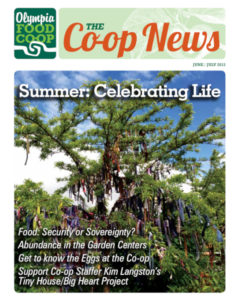