Co-op News Fall 1985 PDF
WATER FOR LIFE
Imagine walking a mile to the river, digging a hole in the dry river bed, waiting 2 hours for it to fill your bowl, and then carrying the fifty pound bowl on your head back to your village. Women in Liberia, West Africa, can spend as much as 6 hours each day carrying water for their families, using a precious 600 calories. The water they carry is contaminated—over half of their children will die before age 5, most from waterborne diseases.

WELLSPRING AFRICA is a non-profit organization, based in Olympia, that is committed to help Liberians drill water wells in several rural villages in their country. Cliff Missen and Carolyn Johnson are coordinating the project here.

The inspiration for the project came out of Cliff’s prior experience working in a village medical clinic in Liberia in ’82. He saw how the village’s contaminated water supply created disease and illness among the people. He talked with a friend, Gabriel Saytonneh, a respected church elder in the village, about the possibility of well digging. It seems the village has bad luck in their well-digging experiences: cave-ins occurred, rains flooded the wells, and they became contaminated easily. Cliff suggested well drilling, recalling portable well drilling equipment from his Alaska homesteading experience. Gabriel’s response was, “This is what my people need. You will send me one.” Cliff left Liberia promising to find a way to help. He sent information on the machines. Gabriel’s response was, “This information is great, but when are you bringing the stuff.” Cliff and Carolyn founded WELLSPRING AFRICA in response to Gabriel’s requests. They will spend 6 months training Liberians in well drilling, construction, and maintenance. At the same time, basic classes in health and sanitation will be conducted.

Carolyn – “I feel real comfortable with being invited to do something. It’s a very specific need and they’re asking us to come and bring a specific kind of equipment that they want and they’re willing to use. Our goal is to go over with equipment and to facilitate Liberians being trained to use it. They will be drilling the wells, providing the labor and materials with the idea that, when we leave, the projects will continue because they won’t be dependent upon us. And Gabriel has done a lot of work over there preparing for the project. He’s got us written into the national water plan, networking the government, He’s gotten letters of commitment from the first villages we’ll go into.”

The Liberian government and Gabriel Saytonneh’s church have pledged $13,000 and $15,000 toward the well drilling. Many, many hours have been spent working toward the goal of 12 wells. Cliff has taken grant writing and well drilling classes. They have studied more Liberian history and geology. Contacts with other people here who have also been to Africa have been made. Fund raising has been the primary concern.

WELLSPRING AFRICA relies on gifts and tax-deductible contributions from concerned folks. Olympians have been very supportive. Children at Boston Harbor Elementary worked and filled penny jars to raise $300 to buy a pump for Saywon village. Donations were collected at local fairs. A car wash was held. Ten people carried a basin of water on their heads for the CROP walk, and 75% of their donations went to WELLSPRING. A local church sponsored a garage sale and made $900 in one day. Cliff and Carolyn have made presentations to dozens of groups and may receive a couple of large grants. They have reached the half way point in their goal of $20,000. This really has been a community wide project!

Liberia lies only five degrees above the equator, so the weather is always warm, and the annual 150 inches of rain usually falls between the months of April and November—with the remainder of the year being very dry.

The Liberians make their living mostly through their farming, with only 15% working in industries, and the annual per capita income is $196. Liberia’s major imports are rubber and iron ore.

The modern Liberia has a very unique history which dates back to its colonization by freed American slaves in the early 1800s. In an effort to rid America of the black influence, the American Colonization Society raised money and chartered ships which took 15,385 to the shores of Liberia.

The colonists set up an American-style form of government (the constitution was written at Harvard) and ruled the country up until 1980, when there were ousted by an indigenous coup led by army Sargent Samuel Doe. 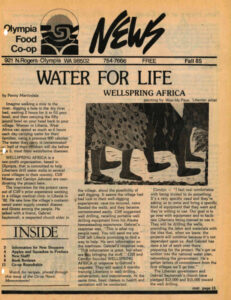