Co-op News August & September 2012 PDF
CECOSESOLA COMES TO OLYMPIA
As I take in the familiar surroundings – the melon green walls of the Olympia Food Co-op’s main meeting room (which is about a third the size of the outdoor patio where workers of the Feria del Centro meet at CECOSESOLA), a handful of sun stunned state workers, joggers, and patrons of Olympia Supply passing outside on Columbia street, other Co-op staff parking their bikes and getting their work papers in order – I am nothing short of blown away by the sight of our friends from Venezuela in the midst of it all. It’s true that since my coworker Alejandra and I had the great honor of visiting and working with CECOSESOLA for a month this winter, I have been daydreaming of this day. But after all the visa preparations, schedule planning, and anticipation, I find it nearly impossible to believe that this is actually happening.

The arrival of our compañer@s, along with my coworkers’ enthusiastic responses to their presentation about CECOSESOLA’s history and values at this week’s three collective meetings, reminds me what a momentous event this exchange is for us at Olympia Food Co-op. It’s true that we have always supported the worldwide cooperative movement through our buying practices – prioritizing products produced cooperatively and seeking out new sources for everything from cooperatively produced bananas to maple syrup. We have also seen ourselves as part of a larger cooperative movement, as evidenced by our mission statement, as well as our leadership in organizations like the NCGA (the National Cooperative Grocers Association) among others. But we have never done anything quite like this before.

Throughout the next six weeks, the opportunity to sit down with internationally based cooperative workers and discuss our shared values, our challenges, and hopes for the future provides endless opportunities for strengthening solidarity, as well as real practical insight from a cooperative making decisions collectively on a scale that dwarfs our own. (In CECOSESOLA’s 50 associated cooperatives, more than 1,200 workers run three food markets, a hospital, a funeral home, several community banks, countless small farms and value-added food operations, and more). Many of us begin to understand in a very concrete way why CECOSESOLA has long emphasized national and international exchanges – some of the compañer@s with us in Olympia have also done similar work in Egypt, Mexico, France, and England, and there is a group from CECOSESOLA in Germany this spring as well.

Writing now that the compañer@s have returned to Barquisimeto and are preparing their first presentations about their trip to Olympia for their coworkers back home, I’d like to provide some highlights from the time they spent with us at Olympia Food Co-op. The Evergreen State College was a cosponsor of the exchange, and the compañer@s visited and worked with an impressive number of area organizations during their time here – from Centro de la Raza in Seattle to GRuB, Cielo, MIJAS, the Flaming Eggplant, and the Thurston County Food Bank in Olympia, to KBOO and the Alberta Food Co-op in Portland, plus more that I am probably forgetting. What follows is only a portion of what they experienced while here in the United States, but for those of us at Olympia Food Co-op, it was a very meaningful portion indeed.

Cecosesolianistas volunteered in the stores on Thursdays and Sundays each week they were in Olympia. They spoke with customers, processed deliveries, built carrot wheels, and generally knocked everybody’s socks off with the amount of work they got done and the aesthetic eye and attention to detail they brought to stocking and building displays. By the end of their time in Olympia, if someone who was supposed to work a shift with the compañer@s got sick, it wasn’t necessary to replace the labor. Our visiting friends had learned the work so thoroughly they did an amazing job on their own.

Several Olympia Food Co-op groups invited folks from CECOSESOLA to their meetings, including the Board of Directors and Big Picture CAT, the group responsible for vision and maintenance of the staff’s evolving structure as a collective. Here is an example of the kinds of conversations that were had.

Big Picture CAT: Given the limitations of time that we experience at Olympia Food Co-op*, what practices do you think we might be able to adopt to improve confianza (trust) among workers and help us make more sustainable decisions?

* CECOSESOLA’s workers receive a base anticipo (anticipated salary) instead of being paid by the hour, and their food markets are only open on weekends, so there are several days each week during which workers can meet in large groups to reflect upon any issue that comes up, for as long as they need.

Compañer@s: Maybe you could find a time of day and day of the week that generally has the lowest sales, and assign a rotating skeleton crew to take care of the stores, so that almost all of the collective can meet without having to impact customers. If you met very close to the stores, people could be pulled from the meeting to help out if things got unexpectedly busy, and this would give more time to build relationships and give each decision the amount of time it needs.

On June 1st & 2nd, the compañer@s helped plan and present a conference cosponsored by the Olympia Food Co-op, the Evergreen State College, the Northwest Cooperative Development Center, the Flaming Eggplant and other area organizations, called Creating Cooperatives: Re-claiming our Economy and Livelihood. Here’s what one participant had to say about the opening plenary of the conference, which featured a documentary produced by Evergreen students about women run CECOSESOLA affiliated cooperatives in Venezuela, and a discussion and activity lead by the compañer@s:

“So inspiring! First time in years I have felt educated and empowered. A cohesive and flexible road map!”

Our hope is to hold a similar conference yearly, with the goal of galvanizing new cooperatives and collectives in our area as well as strengthening networks of support between those already doing this work.

The compañer@s visited Sunbreak, Helsing Junction, Wobbly Cart, and Steamboat Island Goat farm, all local growers who are or have been part of the Olympia Food Co-op’s local farms program. They snacked on turnips, strawberries, garlic scapes, and grilled feta, asked questions about organic and sustainable farming practices, learned about the difference between kale and arugula (neither of which is commonly grown in Venezuela’s tropical climate), and got to hear from local farmers what being part of the Olympia Food Co-op’s local program has meant to them.

Lest you get the impression that the exchange was all work and no play, the compañer@s also attended potlucks and bonfires with the Olympia Food Co-op staff, danced at the Urban Onion, visited Mt. Rainier, and attended a Mariners game. (In their honor, Felix Hernandez, one of Venezuela’s most well known major league stars, pitched a winning game.)

At upcoming collective meetings, the Olympia Food Co-op staff will have the chance to reflect together on what this exchange has meant for us as an organization, and to talk about whether we may want to continue with such exchanges in the future. Already, I have heard from many staff members that the exchange has been an incredible help to them, has provided new inspiration for cooperative and collective work, and has opened up new possibilities for how the Olympia Food Co-op can support cooperative development in our area. I look forward to continuing to integrate the lessons from this exchange into our work at the Olympia Food Co-op. Along with exchangee Ricardo, I feel both humbled and honored to have been part of this opportunity to see “two different cultures coming together to discover they have been walking on the same path.”

To read accounts from Cecosesolianistas about their exchange with the Olympia Food Co-op (in Spanish), check the CECOSESOLA blog (no longer available)

If you haven’t yet checked out the blog Alejandra and I kept while in CECOSESOLA this winter, you can find it here 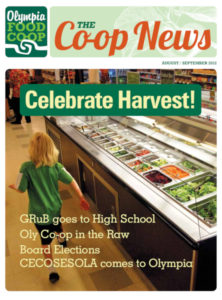