Co-op News April & May 2014 PDF
A VISIT TO COLVIN RANCH
Walking around Colvin Ranch for the first time was a surreal event to say the least. I was coming to the end of a three day long Evergreen (Evergreen State College) field trip lead by Martha Rosemeyer. This meant sixteen hours a day packed with farm tours, panel discussions and collective kitchen duty, topped off with trying to sleep in wet tents surrounded by seventy classmates ranging in age from eighteen to the mid fifties. It is from this milieu that I first looked out on the 550 acres of ranch land that is Colvin Ranch, as well as the equally impressive figure that is Fred Colvin. At about six and a half feet and decked out head to toe in Carhartt’s the color of a Red Angus bull, Fred looked liked the archetypical cattle rancher.

Colvin Ranch was founded in 1851 by Fred’s great great grandfather, Ignatius Colvin. Since then, the initial property has been divided amongst various family members, who then left the ranching lifestyle, leaving Fred as the only member still raising cattle. It is clear Fred is determined to see that his ranch does not fall to the same fate as other parcels once part of Ignatius’s original homestead. At this point, approximately 95% of Colvin Ranch is under conservation easements preventing further development. In the case of the camas meadows, the easements require current and future owners to promote and maintain these precarious wild flowers through livestock grazing in perpetuity. Recently Colvin Ranch added nose pumps to the pasture for limiting the impact the cows have on Scatter Creek by bringing the water to them.

As moving as it was to hear about the Colvin long history in the area, and Fred Colvin’s dedication to preserving that tradition as well as the land that has made it possible, the real excitement for me was discussing the end results: delicious beef! Colvin slaughters his cattle after the second winter to promote the development of intramuscular fat, or marbling. This is the fat that forms between the muscle fibers, slowly releasing throughout the cooking process, creating a moist, tender, “melts in your mouth” steak. This sets Fred apart from other ranchers. Since industrial agriculture is geared towards producing the highest quantity for the lowest cost, most other cattle, even so-called “grass fed” cattle, are slaughtered at a younger age and are fed grains to aid them in putting on more intramuscular fat at an early age. Though this industrial approach debatably creates an equally tender steak, it also decreases the levels of Omega 3 fatty acids, essential for healthy brain cells. This is the difference between simply being “grass fed” and being “grass finished.”

Colvin Ranch is a wonderful convergence of family heritage, ecologically sound grazing practices, and cattle rearing techniques that creates a fantastic steak on all levels. If you are interested in learning more about different contributing factors to the quality of beef and how to prepare different cuts of steaks, consider attending my upcoming “Introduction to Steaks” class (offered through the Olympia Food Co-op’s community kitchen classes) on April 16. 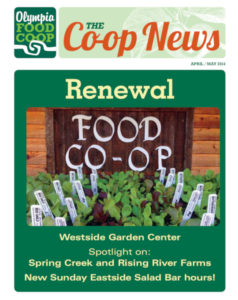