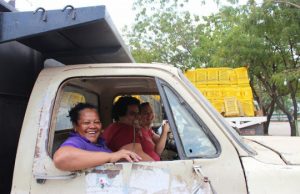 This week, staff of the Olympia Food Co-op signed a letter of support for our friends at CECOSESOLA, a cooperative of cooperatives with over 20,000 associates in Barquisimeto, Venezuela. CECOSESOLA operates as a network of worker collectives that makes decisions by consensus, and offers a variety of services–three large food co-ops, a funeral home, and a hospital, among others–in low-income neighborhoods of Venezuela’s 5th largest city. In 2012, our two co-ops participated in an exchange of workers, in which two staff members from the Olympia Food Co-op had the opportunity to live and work with colleagues at CECOSESOLA, and four staff from CECOSESOLA came to Olympia to work and share experiences with the Olympia Food Co-op and other area organizations.

Now, in the midst of a deepening economic crisis in Venezuela prompted by the drop in international oil prices among other factors, the Venezuelan has made change to its business tax structure that disproportionally impact co-ops, threatening their ability to survive in an increasingly difficult market. Here is a worksheet that shows the impact of the proposed changes (scroll below to see the Translated Correspondence document). Says Ricardo Workers at CECOSESOLA are asking their international partners to write and urge the Venezuelan government to revoke these changes to tax law. Here’s a copy of the letter signed by Olympia Food Co-op staff, which will be translated into Spanish and sent to government officials (scroll below).

Our thoughts and hearts are with our fellow members of the co-operative movement in Venezuela and elsewhere during these economically challenging times!

Letter signed by staff of The Olympia Food Co-op

As a cooperative organization run by a staff collective of 84 members in Olympia, Washington, United States, we are writing to share our experience with CECOSESOLA, an integrated organization of Cooperatives in Lara State, Venezuela. Specifically, we would like to advocate that CECOSESOLA and other qualifying cooperatives be exempted from changes La Ley Organica Technologia e Innovacion, Las leyes del Impuesto Sobre La Renta y del Impuesto al Valor Agregado, which now place an undue tax burden upon cooperatives.

In 2012, the Olympia Food Co-op, a cooperative that aims to make good food accessible to more people by selling local and organic foods at affordable prices, was lucky enough to undergo an exchange of workers with CECOSESOLA. During this exchange, two of our staff members worked with CECOSESOLA for a month, while four compañeros from CECOSESOLA came to Olympia to work with our co-op and other community organizations for six weeks. What we experienced in our exchange with CECOSESOLA was an organization truly committed to cooperative practice, in which all workers bore equal responsibility for running the business and received equal compensation for their work. With their food stores, funeral parlor, hospital, and other projects in low-income areas of Barquisimeto, CECOSESOLA listens to members of the community to find out their needs, and then offers products and services to community members at prices they can afford, prices far below those set by capitalist businesses. CECOSESOLA also employs thousands of workers who work upwards of 60 hours each week to assure that the cooperative continues to provide needed services and goods in their own communities.

The Olympia Food Co-op is a non-profit cooperative that seeks worker empowerment, social justice, and economic equity in our community and throughout the world. As an organization in the United States, we have seen how unbridled capitalism and corporate power, often arising within our own country, has created suffering in our communities and around the globe. We wish to do business in a just, community-centered way, and we have been greatly inspired by our relationship with CECOSESOLA and their strong commitment both to the international cooperative movement, and to the health and well-being of people in their region. Members of CECOSESOLA have traveled Chiapas, Mexico, to Egypt, Germany, France, and the United States, among others, to help support communities in creating true cooperatives—means of production that empower workers while creating greater social and economic justice in their communities. CECOSESOLA regularly welcomes visitors from all over the world who wish to learn and share experiences, and who often leave committed to creating and supporting cooperative in their own countries. In short, CECOSESOLA is a world leader. It would be a great tragedy to see successful, thriving, true cooperatives like CECOSESOLA harmed or even run out of business due to the levying of new taxes they cannot afford.

During difficult economic times, cooperatives have the unique ability to offer solidarity pricing and to be responsible to their communities in ways many profit-driven businesses cannot or will not. We believe true cooperatives are more resilient during economic crises than many other businesses and hope you will continue to support cooperatives in practice and law.

We are writing to inform you of the great harm that is being caused by a set of laws against cooperatives deeply committed to social change. As a consequence of these laws, far from receiving the protection from the National Government guaranteed by the Bolivarian Constitution (articles 118 & 308) the worker-run cooperatives that are revolutionizing economic practice have not only been abandoned, but treated worse than any traditional capitalist business. In Appendix 1 we’ve shared the experience of CECOSESOLA as an example of this type of cooperative.

We are sure that these measures have been taken, unaware of their grave consequences, since they will bring to an end processes of social transformation that have supported the creation of non-capitalist means of production.

How can we justify that capitalist businesses have priority over these cooperatives whose practices you find outlined in the objectives and priorities of the National Plan?

Perhaps due to the bad example set by these false cooperatives, and a lack of awareness, they have progressively eliminated the laws that, based in the Constitution, allowed the support of true cooperatives. In the Organic Law of Technological Sciences and Innovation (LOCTI) as well as the recent modifications made to the laws governing Income Tax (ISR) and the Added Value Tax (IVA), they treat all cooperatives as if they were capitalist businesses. On top of this, the Cooperative Law requires us to put aside a substantial amount of funds aimed at social ends. True cooperatives find ourselves at a disadvantage compared to capitalist companies and we see ourselves being forced to disappear.

Like we show in Appendix 2, based on the new laws, cooperatives must dedicate 37% of their Total Sales (Gross Revenue) to taxes and social funds, leaving only 63% for operational costs. Capitalist enterprises are only required to set aside 15.5%. A cooperative that conforms to the Cooperative Law, where all workers are members and all profits are reinvested in social programs, is obligated to divert more than double what a capitalist business is required.

In order to avoid bringing about the end of a cooperative movement committed to social transformation, we propose that the State look for a way in which cooperatives have, at least, the same economic conditions as capitalist businesses. This means exempting these cooperatives from paying the above-mentioned taxes. Of course, for this to happen, the National Superintendent of Cooperatives will need to testify that they comply with the required social stipulations outlined in Article 90 of the Special Law of Cooperative Associations.

We thank you in advance for any effort on your part that could help this situation.

*This amount of IVA is an approximation.

**As required by the cooperative law all workers are members and don’t receive salaries or wages, but instead take advance payments from profits.

As a result: cooperatives must dedicate 37% of their Total Sales (Gross Revenue) to taxes and social funds, leaving only 63% for operational costs. Capitalist enterprises are only required to set aside 15.5%.

A cooperative that follows the Cooperative Law, where all workers are members and all profits are reinvested in social programs, is obligated to divert more than double what a capitalist business is required.