Co-op News Spring 1986 PDF
LITTLE DELI HITS THE BIG TIME
For the past few months the Co-op has been conducting an experiment called the Little Deli. Every Wednesday a Co-op staff person (myself) has been whipping up approximately 40 sandwiches and offering them for sale out of the Dairy Cooler. Shoppers are usually offered two or three choices of sandwiches ranging from Awesome Cream Cheese Spread on an onion bagel; to Mom’s Tofu; to Swiss on a Rye Roll, to the Best P.B. Ever, with many variations in between. There are occasionally a few bonus sweet treats offered as well.

This Little Deli has been such a smashing success that the sandwiches rarely make it through the day. As a result, the Little Deli is going to grow up and become a new feature at the Co-op: the Bigger Deli.

On March 31, the Co-op Board approved a capital plan allotting funds for the installation of a deli-display cooler, a fruit/vegetable juicer, a slicer, and an industrial blender. All of this equipment will be installed in the cheese packaging area at the rear of the store. Co-op shoppers will soon be able to buy specialty cheeses sliced to order, freshly squeezed fruit and vegetable juices, and refreshing smoothies, as well as sandwiches and salads. The Deli will be staffed by Working Members during lunch and dinner hours. At other times deli items will be available in the Dairy Cooler. Opening day is set for May 31. So mark your calendars and get ready for some big changes to happen in the back of the store.

If this sounds like a great idea to you and you’re wondering how you can help, there are several possibilities. First, we are soliciting entries in the “Name the Deli Contest.” If you have any ideas, leave them in the suggestion bowl at the front of the store or look for the “Name the Deli” box to be appearing soon. If your name is chosen, you will win a free lunch at the Deli, and you’ll have the satisfaction of knowing you were instrumental in the Deli’s beginnings. Another place the Deli will need assistance will be with working members. We will need a crew of about 16 working members to staff the Deli. Trainings will begin in May. This is a great chance to learn about running a deli, to get discounts on food, and to be a part of the beginning of a very exciting change at the Co-op.

If you are interested, please fill out a Working Member application and indicate that you want to work in the Deli. At last, Olympia will have a place for fast food that is both nutritious and fun, as well as being conveniently located at the grocery store. Keep watching for further developments as the Little Deli grows up. 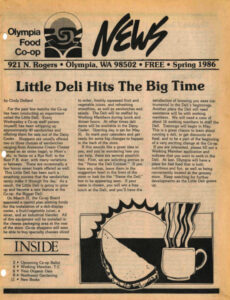