Co-op News November 1995 PDF
EASTSIDE
My goodness! Would you look at those leaves turning colors! I just love this time of year! We’ve bid a fond farewell to September and rushed head long into October with nary a backward glance. Well, maybe just this one backward glance that I’m going to make, so that ya’ll will be “up-to-speed” on the doing over here at the eastside store. September was “Back to School” month, and a lot of our young (and some not so young) members returned to the classroom for massive amounts of study and various other academia. Thanks to all of them for the terrific work that they did over the summer. (Boy! Will they be MISSED!)

September was also “Capital Plan Implementation” month, and a goodly number of the repair plans and a few upgrades that the Co-op needed went into effect. Two of them have gotten done already. One of them was that the deli was able to upgrade to a much needed industrial food processor. The other I’ll let the westside folks tell you about, because I don’t want them to go through the ceiling!

While we’re on the ceiling, the last day of September was the day that the staff and a core of wonderful working members counted everything from floor to ceiling thus completing another INVENTORY! If you weren’t one of the working members who helped out, you really missed out! There was laughter, fun, good music and conversation, not to mention the wonderful little buffet that fueled all of our fires ‘til the end was in sight. If you’re kicking yourself that you didn’t come in for inventory, we have another one coming up in December. Keep your eyes peeled for a poster announcing the day and time.

Don’t take your peepers off the future, yet, though because it’s time to take a beep at what’s coming up in October. First there’s going to be another of the capital plans finished … probably as this goes to print. The new French drain is being installed on the west side of the eastside store (confused?) down next to the warehouse, by our maintenance and repair manager, Fred, and his trusty working member, Doug. I took a look at it last night, and the hole looked pretty deep, so I’m grateful for all of their hard work. If you see ‘em, tell ‘em “Thanks,” if you feel the mood hit.

Also happening in October, All Hallows Eve is approaching, and the eastside has already laid in a supply of sugar free Halloween candy, which will be on the shelves for your trick or treat needs. These are accompanied by a pretty large batch of “sale” items for October, including many brand new products -such as caramel corn with nuts! – that may just surprise you. I know they surprised me!

Last of all, but by NO means least, is the fact that we’re now doing a slew of new working member trainings for folks who want to keep busy during the upcoming rainy season. Among the trainings planned are for the areas of deli, stocker, produce and cashier. We’re also in desperate need of openers and closers. If any of these sound like the working member job you’re aching for, contact Nina, our working member coordinator, and she’ll set you up.

So… that’s all the news I can think of this time. See ya!

RAISING THE ROOF
Thanks to an amazing crew of volunteers the ailing westside roof got torn off in an also amazing two days. The Co-op also got painted this month – thanks to Pyramid Painting and the leftover recycled paint from the eastside Co-op. We’ll be completing more capital plans in the next month. We’ll be moving most of the bulk department into more durable and cleanable dispensers AND increasing the product line. I’m excited about the new dairy cooler floor and the chance to ply, er, put in concrete into the mysterious access tunnel under the floor. The wet rack of the produce cooler will just barely make it to the installation of its new guts. We hope to reset some small areas of the store if we can make the time. But….

IT’S SO BUSY!
This is one of the busiest times of the year at the westside Co-op. Sometimes it seems like the old days before there were two Co-ops. Night times seem to be most frantic. If you prefer a more relaxed time to shop the mornings are a better bet than evenings. Thanks to all the volunteers that make that much business seem reasonable. We’re happy and gratified that the westside Co-op is still so popular even though there is that spiffy store on the eastside. We went from a financially bleak looking year to a pretty good year. Thanks to all our customers.

IT BEATS SHIVERING BORDOM!
I used to volunteer at the Co-op years ago to avoid my under heated student household and I stayed for the camaraderie and the discount. You can train at either Co-op for a shift at either or both Co-ops. Volunteers at the westside Co-op do about half the work done in the store. It’s a rare and beautiful thing. 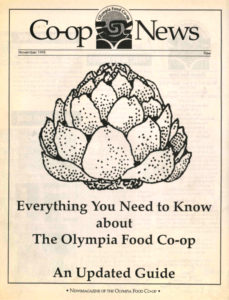