Representatives of Olympia Community Solar Co-op recently attended a meeting of the Ecological Planning Committee of the Olympia Food Co-op’s Board of Directors. The Co-op Board was so impressed with Olympia Community Solar’s innovative Hummingbird Project, they purchased ten solar units on behalf of the Co-op. Ryan, from Oly Solar joined Co-op Board and Eco-Planning Committee Member, Jace, to talk about the collaborative Hummingbird Project.

Jace: Let’s start with the history of Olympia Community Solar.

Jace: Tell me a little bit more about the community solar model used in the Hummingbird Project. How does it work?

Ryan: Well, basically, we – as the project developers – help businesses and nonprofits figure out if they are good candidates for a solar array. That is to say, a collection of solar panels. Now, the idea behind it being community solar is that a group of people own the solar array together. This makes it more accessible to people who don’t own their own homes, whose homes might not be suitable for solar arrays, or who can’t afford the upfront costs. It works by people buying a portion of the solar array, and then they actually own the electricity that their portion creates.

Jace: So that is what the Hummingbird Project is?

Ryan: Correct! The Hummingbird Project is a solar array that is being installed on the Hands On Children’s Museum. So once the array has been paid back by the people who bought portions of it, the museum will have their own array that they are then using to generate their own electricity. This project is focused on the community aspect, and will be one of the largest solar projects in Thurston County. This project alone will prevent a projected 5 million pounds of pollution, save the Children’s Museum more than a half-million dollars on electricity, and provide solar education to all the museum’s visitors.

Jace: How much does a portion cost?

Ryan: The project is available in 800 ‘Solar Units.’ Each solar unit costs $300, and represents an 18 year subscription to the energy generation of about 1/3 of a solar panel. People can purchase solar units for themselves or donate a unit to a participating nonprofit on our webpage olysol.org.

Jace: What is the rate of return people can expect to see on something like this?

Ryan: You get paid back up to however much you spent over the course of several years, and once the entire array is paid back, it is then donated to whatever building or business it is built on. Community solar is especially exciting because you can buy a portion in someone else’s name, or in the name of a non profit, for example, and then the money paid back would go back to them.

Jace: What are the long-term goals for Olympia Community Solar?

Ryan: Our biggest goal is to make clean energy accessible to everyone. It is the most beneficial way to go about clean energy. We also do a lot of work in education and policy. As an example, we have an exhibit in the Children’s Museum that ties in to their array. We have also given demonstrations at a variety of schools on how community solar works and how young people can be a part of the clean energy solution.  We also have worked closely with Beth Doglio and David Warren. We’re working hard to make sure this is accessible to low income people too. We want to bring everyone to the table.

Jace: If community members want to get involved, how do they do that? What can they expect?

Ryan: They can check out our website, which has lots of information about the Hummingbird Project, and if they want, they can enroll in it. It’s just like buying anything else online. It’s really that simple. They can also call us, sign up for our newsletter, or find us on social media. 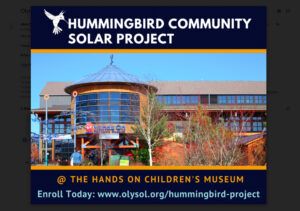