PRODUCT IMAGES AND THE CO-OP, AN EDITOR’S PERSPECTIVE
February and March honor the cultures and legacies of African Americans and women by declaring these months as national heritage months (there are also other heritage months throughout the year). So it seems an appropriate time to consider the Co-op’s practice to not carry products that have exploitive or oppressive images on their packaging. Like the boycott policy, I have often felt that the Product Selection policy is misunderstood by some of the membership. I have been in many discussions with members, and with those who don’t shop at the Co-op because of our limited product line, about the nature of the Co-op’s social choices and how they work into policy. While it is true that other stores carrying natural foods may look more bountiful, offering full product lines from any given company, you cannot be certain that these selections represent the best in natural food politics. This is a complex issue that could surely be viewed as subjective, but what is so unique about the Co-op is our willingness to engage in this debate and to make choices based on values and not just on profit margins.

Often, I have heard people being annoyed that this or that product is not available at the Co-op, but that it is available at Trader Joe’s, Whole Foods, or Stormans, etc. My understanding is that you can ask the Staff to order it or consider ordering or carrying it, or they will give you a good explanation as to why we don’t carry it. I also am glad that there is an opportunity for discussing the policy around exploitive packaging, products, and boycotts, and I think of how lucky we are that we have a staff who is willing to do this work for us; that for the most part, the products within the Co-op have been screened before being placed on the shelves. I am also mindful of my own identity. It is usual in my conversations about this subject that I am speaking with white people who are speaking frustratingly about a choice made based on images or names that they are not aware may be harmful.

Four examples of product lines that the Co-op does not carry (and are missed by my friends and or other shoppers) for packaging reasons are: Veggie Booty, Seventh Generation, Blue Sky Sodas, and Bearitos. These are often considered “groovy” products, meaning nutritionally or environmentally sound, and often these companies have good politics themselves.

My understanding is that the Booty line of snacks included an image on one of its products of a thin, scantily-clad woman on their low-fat (diet) snack. This packaging design implied that this image might be desirable for women and so choosing a low fat, diet version of their snacks was the way to go. The staff deemed this offensive to women and to people with bodies other than the stereotypical thin used in most advertising. Unfortunately, kids love these snacks, and they provide several gluten free and non dairy options that are palatable to young tastes.

Seventh Generation products are not carried by the Co-op because of its name. The term “Seventh Generation” comes from an Iroquois quote from their constitution, which asks people to consider the repercussions of their actions for the next seven generations – a good concept, right? Yes, but for some Native people this is a spiritual concept that is being used to make money by non Native people, despite its good intentions and sound products. Otherwise, this company does not use Native imagery nor do they pretend to represent any other Native philosophy or culture. But the bottom line is that the use of Native American names, cultural aspects, and philosophies has been so pervasive and has had a documented ill effect on Native people, especially youth. Think sports team names and mascots, Crazy Horse Malt Liquor, Cherokee clothing and cars, etc.

Blue Sky Sodas is similar in that they changed their packaging to include graphic depictions of ancient symbols and designs, which are considered sacred to Native People. They are a smaller scale soda company based in New Mexico that donates some of its profits to environmental causes. The Co-op decided to stop carrying the soda because of the recognition that Native People continue to suffer a history of genocide and oppression, and Blue Sky’s commercialization and depiction of these graphics serves to ignore that history and perpetuates the exploitation and oppression of Native culture. The use of this imagery trivializes and abuses Native culture for marketing purposes.

Lastly, Bearitos makes Mexican style food products, including canned beans and tortilla chips. For years, their products have featured a bear wearing a serape or a sombrero, as if Mexican people were cute, sleepy little bears, caricatures of themselves. This imagery possibly served to make the products easier for a non Mexican market to embrace, but in the meantime, added to a glut of images that make fun of or characterize Mexican people as lazy, and in fact, not even as people at all.

In all of these cases, the Co-op has strived to carry an alternative to these products with successful results, often resulting in bolstering sales of a smaller, more localized or unknown company (which also speaks to our mission statement). And the Co-op lets the company know why we have chosen to stop carrying their product and what would make us consider carrying it again.

An example of success in this part of the product selection process is the soy jerky, Jerquee. For a time they used a stereotypical “sexy” woman image on their display boxes. When they were contacted and confronted about this by the Co-op, they explained that they were trying to appeal to the bar and tavern snack market. After the Co-op told them we were considering discontinuation of their product, they came back to us saying that they had reconsidered, thanked us for it, and told us that we were right. They no longer use such packaging.

I am not saying you are a bad person if you buy any of these above mentioned products because there are other benefits to these products than just their negative imagery. I, in fact, have bought Veggie Booty if shopping at another grocery store, and have also chosen at times to use Seventh Generation diapers for their non dioxide, non perfumed disposable diapers, well aware of the Co-op’s decisions. To be contradictory is human, and often it feels like a relief to not be so “politically perfect” (a conditioned response from growing up in a consumer culture, I believe). And in some of the cases, I recognize that my choice to purchase these products can be a choice because of my white privilege, that in some cases, the offensive product is not targeting my identity and group. But if people are getting hurt, then it is worth it to me to strive to make the best choices in my actions and with my purchases. It is the idea that “no one is free when others are oppressed,” so even my “privilege” in purchasing, eventually does not serve me or anyone. What I appreciate is that the 99% of the time that I am doing my grocery shopping at the Co-op, I know that I am engaging in shopping that is good for people and the planet.

Ultimately, oppressive and exploitive packaging and marketing practices hurt us all, and not just the groups targeted by these negative images. The Co-op understands the power of money and the market; they (we) also understand the power of its organization and the fact that our membership spends a lot of money in the natural food industry and, just as importantly, wants to engage in conscious consumerism. We are a collective organization because we are a collective society. If one person feels hurt by an image, then it is worth our time to investigate it and make choices that support everyone’s sense of value. It is a broad concept to equate one picture with the health of a culture, but by taking on marketing inequities, we send a message that every person is a whole person, that his or her concerns are valid, and that we will not continue to perpetuate the power inequities upon which our country was built. 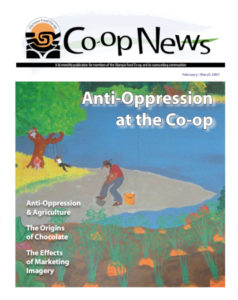