Co-op News August 1978 PDF
SENATE PASSES BANK BILL
The National Consumer Co-operative Bank Act passed the Senate by a vote of 60 to 33 on July 13, 1978. The House of Representatives passed its companion bill a year ago. Senators Jackson and Magnuson both voted in favor.

This bill will create a National Consumer Co-operative Bank which will loan money at current market interest rates to cooperatives and guarantee such loans from other sources. In order to be eligible for loans a co-op must operate on a not-for-profit basis, must have a “sound organizational structure and future income prospects to permit full repayment of the loan,” must be ineligible for loans from other sources, and meet other technical structural requirements. The bank will originally be funded by the Federal government and governed by the board appointed by the President. However, as co-ops borrow from the bank they will also be required to buy stock in the bank such that the board will eventually consist almost entirely of co-op representatives. The bill contains provisions to prevent control by any one organization or class of organizations, i.e. housing co-ops, food co-ops, etc.

The bill also creates an Office of Self-Help and Technical Assistance which will provide training, information and assistance on co-op operation and management, will do and sponsor research in areas of interest to co-ops and consumers, and will be permitted to make some loans at lowered rates to co-ops that serve low income people.

Because the Senate version differs from the version of the bill passed by the House of Representatives, it will now have to go into a conference committee which will make the necessary compromises and return the bill to both houses for approval. Carter is expected to approve the bill as he came out recently in support of it. After this work is completed the House and Senate will then need to vote to appropriate the funds.

This could be a lengthy process. At this writing members of the conference committee have yet to be chosen.

The senate version of the bill cut government allocations for the bank from $500 million to $300 million (all to be eventually repaid) and allocations for the office from $250 million to $70 million as well as other changes. Nevertheless, it provides a powerful tool for the development of cooperatives. Proponents of the bill see the development of co-ops as a potential solution or partial solution for problems ranging from inflation to the quality of consumer goods and services to the lack of consumer control over what goods and services are available. It is hoped that government investment in co-ops will pay for itself by decreasing needs for other forms of government assistance programs. Opponents of this bill saw it as another financial responsibility of the government, a program funded by the taxpayers which would be a serious threat to other small businesses (a clause was added to protect small businesses) and a foolish way to invest government money are we sure we want to lend money to ‘those’ kinds of people?).

I will wonder for a long time how a government which I have been in opposition to over most issues for a long time managed to pass a piece of legislation as positive and powerful as this one seems to be, but I must admit (as I hold my breath and wonder, is it really going to work?) that I am pleased. 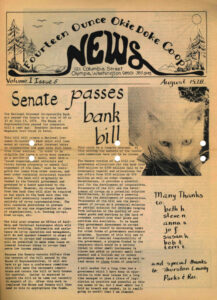