Co-op News April & May 2005 PDF
LOCAL PRODUCE AT THE OLYMPIA FOOD CO-OP
Did you know that the Olympia Food Co-op works in partnership with local farms and orchards to bring you the freshest produce available? In addition to CSA shares and the farmers market, Co-op members are able to purchase fresh, local produce right here in our stores. If you look closely at many of the signs in the produce section, you may notice WA instead of CA and probably familiar names of farms in the corners. This program is yet another example of the Co-op’s continued commitment to fostering local production and economy. Each December, the Co-op produce managers invite all of the farmers and orchardists who we bought from in the past season, as well as growers newly interested in working with the Co-op, to our annual farmers meeting. The farmers receive with their invitations, a local grower Intend to Grow form, a 2004 local farm survey, and guidelines for farmer sales to the Olympia Food Co-op info sheet. The farmers bring this completed information paperwork to our meeting. This year we had over thirty farmers come to our delicious potluck meeting — featuring a dish made from something you grow. It is here that we share successes of the previous season and brainstorm improvements for the season to come. During the potluck, farmers are able to share ideas and offer support to each other about all sorts of issues. Because of our success in building both business and community, there are a large, and still growing, number of local farms and orchards wanting to sell to us. The next step of the local produce process is for the Co-op’s produce managers to consolidate all of the farm or orchard’s Intend to Grow lists, some of which have more than 50 items. From the combined Intend to Grow lists, we make a master list that we call the Local Buying Guide. The Local Buying Guide helps the produce managers organize their orders based on current availability. The principles we use in our buying guide prioritization are:

1. distributing the Co-op’s buying power as equally as possible between all of the farms and orchards

2. buying from the smaller farms that have fewer items to sell to us over larger farms growing the same items

4. ability to meet the quantity required by our demand

5. ensuring delivery – can a farm bring the product as often as we need it while ensuring product freshness.

This may sound like a fairly straight forward process, but it becomes complicated as we divide a single crop of something like cucumbers into one farm being the primary supplier for the westside Co-op, and a different farm being the primary supplier for the eastside Co-op (or vice-versa). Then, there may be two other farms that serve as the secondary supplier of cucumbers for each of the Co-ops. Other farms may serve as the third supplier, and then sometimes we divide a single, long season crop into an early supplier or late supplier.

THE CO-OP’S PRICING SYSTEM
One of the most important aspects of this process is the method the Co-op uses to determine the wholesale prices we pay to the farmers and the retail prices we sell the produce for. The produce the Co-op sells from non local farms comes from two large wholesale produce distributors, based in Seattle and Portland. For these items, the Co-op uses a flat 50% mark-up to establish our retail prices. For our local farms, we use a mark-up system that attempts to “level the playing field” for small local farmers. We do this through two steps:

1. Determining the wholesale cost: we pay local farmers 13% above the amount that the big wholesalers charge.

2. Marking-up to retail: we markup local produce 32% to establish our retail price.

Although we pay more to farmers than we pay to the large distributors, our local produce is competitively priced because we use a lower markup for local produce. In this way the Co-op is creating a reliable marketplace to local farmers and a steady source of local produce to our members at the same prices we would charge for products from the big distributors.

“Our local produce program makes me proud to be involved in the successful and sustainable relationship between local farmers and the produce departments of our member owned food Co-op. The Co-op, as a retail store, has a unique and valuable connection to over 25 farms and orchards that market their high quality produce through us to you, our members, and the public at large. Talking with farmers has become one of my favorite times of the week. As this outdoor growing season approaches, I look forward to it eagerly. I am pleased to participate in bringing you the best produce available from our local farms and Washington orchards.” 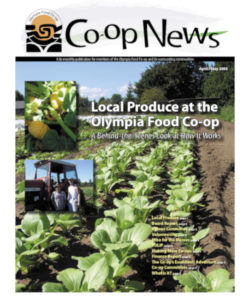