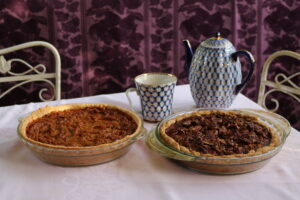 “Easy as pie” is a saying I adhere to. Some people take making a pie crust very seriously and end up many hours later with the flakiest of pie crusts, like pastry. That’s great and I would not discourage anyone from going the extra mile. But if you want a delicious, no nonsense pie crust that is easy to work with and takes minutes, you can follow this recipe and ignore the gasps of those who would never use anything but the proper pastry cutter to work in the butter. 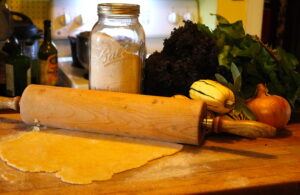 For each crust use 1 cup flour, 1 stick (1/2 cup) butter and 1/8th cup cold water. If you are using unsalted butter, add a quarter tsp of salt. If you are making a double crust pie, double this recipe, and so on for each crust.

Using a pastry cutter, a food processor, or I use my stand-up mixer, cut cold butter into flour until you get an oatmeal consistency. Add cold water and mix just until dough sticks together. Flour a board. I like to use whole wheat flour which will impart a nuttiness to your crust. Divide dough into even balls depending on how many crusts you are making. Roll out crusts one at a time and put into pie pan or save for top crusts. Use excess dough to shape leaves, etc. for the tops of your pies or use cookie cutters, sprinkle with cinnamon and sugar, and bake to make yummy cookies. Don’t forget to make small slits in your top crusts to allow for steam.

The filling of both savory pies below can be made vegan, so I would recommend buying a ready to bake vegan pie crust if you are going that route.

I was served this dish by a friend in Vermont. It’s delicious. Thank you, Riley! 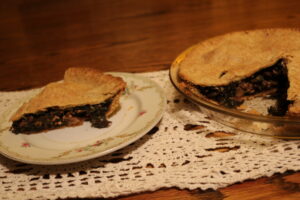 Preheat oven to 350. Saute two bunches of collard greens with chopped onion, several cloves of garlic in butter or olive oil. Salt and pepper to taste, making allowances for the salty cheese to be added. Remove from heat, stir in two beaten eggs and 8 ounces feta or a vegan cheese. Mix well and add to prepared pie crust. Add a top crust, make slits and bake until crust is a golden brown. You can brush the top with melted butter or olive oil if you are going for first prize!

I got this amazing dish from Bon Appetit and immediately simplified it and added it to my regular rotation. Here’s the original recipe if you want to get fancier: https://www.bonappetit.com/story/caramelized-onion-and-squash-tart 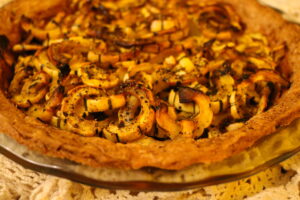 Preheat oven to 350. Chop 4 yellow onions and saute on medium heat in 2 tbls olive oil or butter until they are golden brown, 15-20 minutes. Add 3 cloves chopped garlic and continue cooking, stirring often so they don’t scorch, until onions are a rich brown color. Stir in grated cheese. Salt and pepper to taste.

Melt remaining 2 tablespoons of butter or heat olive oil, add chopped sage and lightly saute. Mix into sliced delicata. Add salt and pepper to taste and spread over onions in the pie crust.

Bake on the lower oven rack until squash is well browned and cooked through. 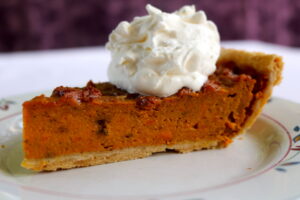 Preheat oven to 350. Cut pie pumpkin in half and scrape out seeds and pulp. Feel free to roast seeds to add to soups and salads for some yummy crunch. Put pumpkin flesh side down onto a baking sheet and bake until flesh is soft. Cool, then scrape flesh out of pumpkin shell and mash. If you like a lumpier pie you can stop now, if you want a smoother texture, puree pumpkin flesh. This step can be done in advance with several pumpkins and cooked pumpkin can be refrigerated or frozen until ready to use for soups, casseroles or pies.

Preheat oven to 425. Beat eggs in a large bowl then add the rest of the ingredients to eggs. Mix well. Use enough heavy cream to achieve a texture like a thick stew. Add to prepared pie crust. Bake for 15 minutes then reduce heat to 350 and bake for another 30 to 45 minutes until an inserted knife comes out clean.

My mother is from Louisiana so pecan pie has been a staple as long as I can remember. My family still sends me Louisiana pecans every winter from Bergeron, https://bergeronspecans.com, because they make the best pies. 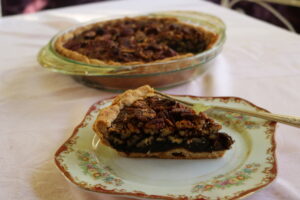 Preheat oven to 425. Beat eggs in large bowl. Add the rest of the ingredients, except for the pecans and beat well. Fold in pecans and pour into prepared pie crust. Bake for 15 minutes then reduce heat to 350 and bake 30 – 45 minutes more or until pecans are a rich brown color and an inserted knife comes out clean.