FAIR TRADE
United Farm Workers are teaming up with small orchardists in Washington state to produce what will be the nation’s first fairly traded apples and pears. Recognizing that farmworkers and small farmers have more economic commonalities than differences, the campaign will enlist the support of consumers and retailers to see that a larger percent of the retail price of the fruit actually returns to the farmers and farmworkers.

Right now, when you pay a dollar a pound for an apple, the farmworkers make about 4 cents, the farmers make 7 cents, the middle folks (retailers and wholesalers) make 68 cents and the other 21 cents pays for packing, sales and transportation. This kind of breakdown leaves farmer and farmworker alike on the bottom of the food chain.

Just like many of the world’s coffee producers, the Washington State apple industry is in trouble. In recent years, low prices have led to the loss of nearly 25,000 acres of productive orchards.

Mexico is the largest purchaser of Washington State apples. In 1998 four Mexican labor unions filed a complaint against the state’s apple industry. The complaint, filed under the labor side agreement of the North American Free Trade Agreement (NAFTA), alleges that United States laws on labor protections are either inadequate or aren’t being enforced. Although unlikely, Mexico could seek trade sanctions against the apple industry.

United Farm Workers and local growers are taking their cues from the Fair Trade Coffee campaign, which has set price and production standards that keep small farmers in business and give consumers confidence in what they are buying. Teaming up under a Fair Trade label is a win-win-win proposition for farmworkers, growers and consumers alike. Under the Fair Trade label, wages and working conditions would meet certain standards, and the growers will be guaranteed a higher share of the profits.

Most people care about how their food is produced. When they can afford it, most people will choose products that have been produced justly and conscientiously. When retailers are convinced of this, and do their part to inform their customers of the conditions under which their food is produced, a market can be built for domestic Fair Trade fresh produce.

AND THEN THERE’S CHOCOLATE…
With over a million cocoa farms and plantations, the Ivory Coast of Africa is the world’s largest producer of cocoa beans. Last fall, a British documentary entitled “Slavery” reported that 90 percent of Ivory Coast cocoa plantations use slave labor. Human traffickers entice people, primarily young men and boys from the impoverished areas in Benin, Togo and Mali, to work in the cocoa plantations. They promise them paid work, housing and an education. Instead, they sell them to Ivory Coast cocoa plantations owners, where they are forced to work grueling 18-hour days for little to no pay.

40% of the world’s cocoa comes from the Ivory Coast. Like so many other commodities, cocoa is traded on international exchanges. Cocoa beans from the Ivory Coast are mixed with beans from other countries, making it impossible for large chocolate manufacturers to guarantee that their chocolate is not grown by slave labor. Also like so many commodity products, cocoa prices have dropped dramatically over the past 4 years, from a high in 1997 of $1800 (US)/ton to $982/ton this year. Much of this drop in price is driven by a 95 percent increase in production in the Ivory Coast during the 1980’s. Larger and larger cocoa plantations have displaced over 9.4 million hectares of rainforest, devastating the area’s biodiversity.

Transfair, certifiers of Fair Trade coffee, is working to bring fair trading standards to cocoa production. La Siembra Co-operative, in Ottawa Canada imports fair trade cocoa directly from small family farms in Latin American and the Caribbean. These cocoa beans are organic, shade grown, and trade for a minimum price of $1750/ton, protecting the environment and the financial stability of the growers.

The Co-op is committed to making fair trade chocolate products available as they become available to us. Watch for La Siembra Co-operatives products soon, or get them at Traditions Fair Trade, corner of 5th and Water in downtown Olympia. 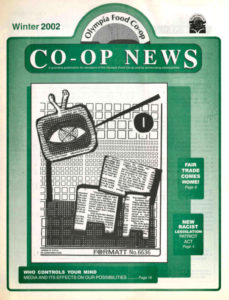