Co-op News Spring 1984 PDF
NEW STAFF FACES ON CO-OP SCENE
Rapid development brought some growing pains to the Olympia Food Co-op in 1982-83. The good news for the members: increased services and product selection, along with a new financial stability.

For workers, however, rapid growth created some problems. Essentially, the daily work and planning time needed to operate the store exceeded the labor supply. Co-op working member involvement didn’t increase enough to meet the higher work load. Staff was stretched to its working limit, trying both to take up the slack in daily operations and to maintain the annual planning cycle necessary for coping effectively with the challenges of growth.

At one point, a temporary solution was sought by paying a few steady working members to assist staff with store operations. In late 1983, the co-op undertook a process of evaluation and reorganization. The transition hasn’t been easy, for members or staff. But the Co-op is now the beneficiary of a hiring process, which gave us three experienced, and articulate new staff members. I recently had the pleasure of talking with them for this interview. So read on…get acquainted…then stop to say “hi” and welcome them next time you’re in.

CHER: Let’s start out by just getting acquainted…perhaps you could tell us who you are and a little about how you got here.

HARRY LEVINE: I’m Harry Levine, I just turned 27. I’m originally from Connecticut, but after eight years in Massachusetts, consider myself much more from there. I’ll have been in this area a year in July. I came out to Olympia to farm last year, and after a wonderful summer farming — but very unsuccessfully financially — I became a VISTA volunteer with Farmer’s Wholesale Co-operative and Farm Community Council. I live with my partner, Jean, in a household of seven people out in the Delphi Valley, although our existence is threatened because our water supply is no good. And our land is for sale — it feels like the whole thing is crumbling apart. We live in a cooperative household. That’s been real nice, to get to know people.

My other big involvements or passions in the world are political things, and music. Music has been wonderful since I’ve moved out here.

Cher: What areas of music?

Harry: Well, we just recently formed a political folk music band. Words are so strange when you try to describe that. We describe ourselves as songs of social change and celebration. It’s all acoustic instruments, a kind of folk orchestra of seven people. We’ve just started playing in the area, but it’s been great. That’s been a dream of min, and it was amazing to go from this place of expressing a dream and talking to one or two people, and all of a sudden we put it together and now it’s happening. Citizen’s Band!

Cher: Was your upbringing consistent with your current political and economic orientation?

Harry: I’d have to say ‘yes’ and ‘no’. The political ideas per se weren’t there. My father—even though we were staunch Democrats always—he still is just that, a staunch Democrat, and has never really moved from that. What did make for this foundation, I feel, is my mother and her overwhelming sense of fairness and needing to understand what’s going on around her, and support for the kids to do that.

Cher: How did you decide to come to work here?

Harry: I’ve always wanted to work at a co-op. I’ve always really like stores. I worked for years in a retail grocery store and managed a produce counter and just loved it. For some reason, I don’t know why, I like the work, I like working with food, and I especially like working around people. And that’s one thing that happens in a store. You’re always meeting new people, people who are bringing food to you and all their stories from around the area, and people you work with, and then the customers. You get to work with people on lots of different levels. I really like it a lot.

Cher: When you peer into your future over the next year or two, what relationship do you see for yourself with the Co-op?

Harry: I still feel basically at that very young stage or something…young and single stage…and I haven’t often thought past one year commitments in what I do. However I’ve never been able to do something like this, as much as I’ve wanted to do it. So it’s very interesting. I haven’t worked a lot of that out yet, because I didn’t perceive staying in this area for years and years and years, but that’s starting to change a little bit. Like the Co-op, I am doing some long range planning for the first time. It’s very new, but I can see just wanting to be here, because I like the situation so much.

Cher: Is there anything else you’d like to say to the co-op members?

Harry: I would encourage people to say anything in the world they need to say to me. 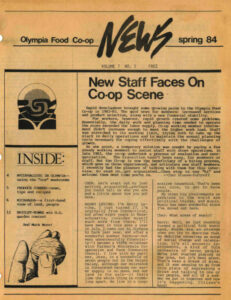