Co-op News May & June 2015 PDF
A BETTER WAY TO CASH IN ON THE COCONUT CRAZE
Health conscious consumers are going crazy for coconuts. Pitched by a cast of ageless celebrities, coconut water has exploded into a $1 billion market. In February, Starbucks started serving coconut milk in its coffee. Other coconut products, such as sugar and oil, are also on the rise globally.

Numerous recent reports have cited the nutrition and beauty benefits of the tropical fruit. And the number of coconut products sold across the world has grown upward of 500% over the past decade, according to the Food and Agriculture Organization of the United Nations.

Seeking to add more fizz to its profits, big beverage muscled into the market, of course. Coca Cola purchased Zico in 2012, and Pepsi owns O.N.E., two of the three top selling coconut water brands in the world.

Vita Coco, a privately held company that just last year sold a big stake to Red Bull China, is the top dog in the space, controlling around 60% of the market and boasting on its web site that it’s in “100,000 stores in the U.S. alone, and in 13 other countries around the world.”

Brazil was the top coconut-producing country in the world until demand outstripped supply around 2010. Since then nearly 90 percent of the world’s coconuts have come from Asia. Indonesia is now the top global producer, growing an estimated 19.8 million tons of coconuts, followed by the Philippines with 17.5 million and India with 11.6 million, according to the Food and Agriculture Organization.

What’s most interesting is that coconuts are primarily grown by small farms, around 95 percent, the Food and Agriculture Organization reports. Are those farmers benefiting from the spike in coconut demand? Not so much, it appears. The dominant players in the beverage business predictably have put downward pricing pressure on farmers, emphasizing “high margin” profits over fair trade and sustainable, environmentally friendly practices.

Coconut farmers make around $7,000 a year at the high end and as little as $72 on the low, according to a Fair Trade USA report.

In some cases, small farmers in Asia are selling off their land or switching to more profitable crops like palm oil.

It doesn’t need to be this way, though. Harmless Harvest, a coconut water producer, refuses to go the short term greed route. It pays farms a decent wage following fair trade practices established by an organization called Fair for Life. Fair for Life partners with companies that are interested in social responsibility and environmental sustainability, designing third party inspection of farm production, manufacturing and trading. “It combines strict social and fair trade standards with adaptability to local conditions,” the Fair for Life website says.

In an interview with the Olympia Food Co-op, Harmless Harvest cofounder Justin Guilbert said, “we build relationships with all of the agents in our supply chain, including our farming community, and
require farms to abide by Fair for Life standards and become certified within 12 months.”

The effects of profit-first companies on farmers are apparent to Guilbert – low quality products, impoverished communities, trashed environment. It’s definitely not an approach built for the long term.

“Caring for each part of the supply chain is the only way to have a truly sustainable business,” the Harmless Harvest founder said. “The only way we, as consumers, can change the trend is to purchase only from companies that integrate the welfare and sustainability of their source into their business model. Until we change this, food companies following the conventional model will have no incentive to change.”

Along with lowball wages, another concern for coconut farmers is the health of their trees. Coconut trees reach their peak production, about 400 coconuts per tree, between the ages of 10 and 30 years.

Planted shortly after World War II, many of the trees in Asia are aging. It takes a tree between six to eight years to start producing. The Food and Agriculture Organization has warned of the coming coconut shortage. Massive replanting efforts are underway. Improving environmental conditions will be an important part of establishing farms that families can continue to pass down through the generations.

“Organic certification is, of course, the first step to promoting a healthy, sustainable farming environment,” Guilbert said. “Without this certification there is no guarantee of what types of chemical pesticides or herbicides are being used. These pollutants remain in the air, ground and surrounding water long after the next harvest.”

Working with its farmer partners in Thailand, Harmless Harvest collaborated with organic and sustainability experts to develop effective methods for planting, growing and harvesting coconuts. One idea they used was to cut canals that lay between the trees. This not only supports better irrigation during the dry season, it also results in outflow of water during the rainy period.

Another coconut product company, GloryBee, also gets hands on with its farmer partners, this one in Butan City in the Northern Philippines. Coconuts are huge business in the Philippines, a top 10 export with nearly $1 billion shipped annually.

“(The) livelihoods of one in every five Filipinos are directly or indirectly dependent on the coconut sector,” said Romulo Arancon, executive director of the Asian and Pacific Coconut Community, in an FAO statement.

GloryBee, the seller of Aunt Patty’s Organic fair trade virgin coconut oil (also on Co-op shelves), helped its small farmer partners in the Philippines drill a new well in 2013 that will provide fresh, safe drinking water in an area where safe water can be a matter of life and death.

“The simple hand-operated well alleviates some of the hardships in the lives of 200 people and may save many young lives,” the company said in a press release. “GloryBee looks forward to being able to make a difference in the lives of these small farmers.”

The actions of companies like Harmless Harvest, GloryBee and Dr. Bronner’s, though small, provide a blueprint for the larger companies – pay the farmers a fair price, take care of the land, think beyond the next quarterly earnings report.

This path, though less traveled, does lead to success, Guilbert says. Even better, it leads to success that will last for a lot longer.

The factory Harmless Harvest built in a coconut grove in Thailand has created over 100 jobs since opening. And it’s growing every year, more farms are implementing organic methods and thriving, and the workers in the communities are getting paid decent wages.

Imagine if the big companies did the same, the dramatic effect it’d have on the millions of small farmers, their families, and communities.

“If every company sought results like these, the consequences of coconut production and its rise in popularity would be a boom for the communities,” Guilbert said. “We look forward to others demonstrating such desires and welcome our competition to go beyond their brand story and integrate the source of their business (the farmers) into their strategic business decisions.” 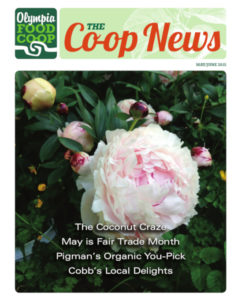