Co-op News July 1997 PDF
EASTSIDE
Author and international lecturer Quentin Crisp once said, “My function in life was to render clear what was already blindingly conspicuous.” In my case, though, that isn’t necessarily so …

The problem over the last couple newsletters has been that the majority of stuff going on at the eastside Co-op is not all that visual, but has more to do with changes that those of us at the Co-op are going through at this time in history. It all started with the newsletter on diversity. That issue’s appearance in our collective mailboxes brought up an entire slew of things a lot of us had never thought of before. I’ve talked to staff and Co-op members alike, and it seems that the overriding thesis is that we’re not comfortable with ourselves. Our ways of being with each other just don’t quite fit us anymore, like a shirt that we’ve outgrown. So … what does that mean? It means it’s time to make a new shirt.

In that spirit, two diversity coordinator positions were formed to help the Co-op create its new clothes; to start the process of change. Our goal is to “draw a pattern” for new lines of communication to follow, so that everyone, whether Co-op member, staff, or working member, can more fully bring themselves into the store. To live diversity, rather than just talk about it. I believe that I told you in the last newsletter that the staff folks had decided to get the ball rolling on this by going to a diversity training, just to see where we are in the process. It was quite an eye opener. One of the many things that we learned was that we are, for the lack of a better phrase, “back in elementary school.” We must go back to the basics and unlearn some of the things that we’ve learned, in order that we might more fully embrace ourselves, and in so doing, become more fully able to embrace others. So, the staff of both stores have given up the upcoming July 4th “holiday,” and scheduled a day long workshop to begin the real work that our talking about diversity founded.

Now I can just hear some of you saying, “Well, what does that do for me?” Let me put it to you this way … the mission of the Co-op, aside from just putting out the best available food for the cheapest available prices, is to be a part of the Olympia community. To do that, it’s vital that we understand, and can interact with, the broadest range of the community possible. We all need to recognize things like the fact that there are folks who have been doing holistic medicine for years, and those who are just hearing about it. There are people in our community who have eaten plantains since they were children, and folks who just tried their first one yesterday. There are people who want to try every kind of food that the human race has ever cooked, and those that only want meat and potatoes.

But it goes beyond even that … the other day I put a CD of Algerian music on the stereo. This made Karim, one of our new staff members, extremely excited because, he said, it was music he didn’t expect to hear outside his own house. This taught me that the music we play, or don’t play, is also a way to embrace, or ignore, our community. I’m sure you can see where I’m going with this … that there are myriad ways in which all of us can embrace each other and ourselves. For the Co-op to embrace the community, it needs to reflect a larger range of the people that inhabit it. One Co-op member described the Co-op to me in this way, “Hey!” she said, “The Co-op is, like, this funky, groovy, hippie place where everything’s pretty laid back.” Yes, I can see that, but it will be a whole bunch more.

WELCOME
Lou Seligman is the new guy on the westside collective. He’s most recently from Minnesota and has tons of co-op experience. Howdy to Lou and his family.

HOT TIME, SUMMER IN THE CITY …
Many of the westside Co-op’s coolers and freezers are older than many of our customers … even the college age customers! On hot humid days, you can hear the compressors dutifully wheezing away in the back of the Co-op. We’re trying to get as many years out of the old machinery as we can (with a big thanks to Jim, our refrigeration wizard). You can help by opening the doors as little as possible during the summer.

TAKE TIME TO HELP US AND YOU
Summer is an excellent time to rack up the volunteer hours at the westside. Some families volunteer together and really accumulate discount hours. Sign up for a training at the Co-op. You can choose from social situations like cashiering or produce or less social tasks like cheese packaging or opening the store.

PUTTING OUT THINKING CAPS ON
Like the eastside, we will be closed for a staff workshop on July 4th. We’re trying to figure out how to run a 4 million dollar business with 34 employees. With consensus and working members, no less! I don’t know if it’s ever been done anywhere, but we will. I’s so cool our store is a successful renegade. 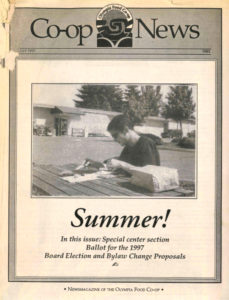