Co-op News February & March 2013 PDF
UNION STRIKE AT CO-OP DISTRIBUTOR
As you may have gathered while shopping in our stores in November and December, the Co-op has been engrossed in ways to support union workers striking against United Natural Foods, Inc., (UNFI) the Co-op’s main supplier. UNFI is a major distributor to co-ops locally and nationally, and supplies our Co-op, as well as several other grocery stores in this area, with natural and organic foods. Teamsters Local 117 has been in contract negotiation with the company since March 2012, and striking members have been at the picket line demanding fair labor practices since December 13. One way we chose to support the strike initially was to cancel a week’s worth of deliveries (totaling nearly $100,000 in lost revenue to UNFI).

However, in order to continue to stock the stores and pay our bills, we have resumed ordering through UNFI. This is a difficult decision that pits our social justice values against the need for us to ensure the business continues to function. We have not made this decision lightly. The union understands and supports our need to begin reordering. We are considering long term solutions to our distribution needs but the situation is complicated, as we are under contract with UNFI as part of our connection with the National Cooperative Grocer’s Association (NCG). This group contract between the Olympia Food Co-op, other food co-ops, and UNFI allows us to maintain prices that are 20 – 30% lower than they would be otherwise. We are doing our best to balance our mission statement’s directive to “encourage economic and social justice” with the directive to “make good food accessible to more people.”

The union has several points that its members say must be addressed to consider a fair labor contract for workers at the Auburn, WA distribution center. A new contract was considered on Jan 11 in which UNFI:

The Co-op continues to do all we can to support the striking workers, and we are in regular contact with Teamsters Local #117 to find out what they need from us. We hope that a resolution comes to light in the near future, and there are some ways you can help! 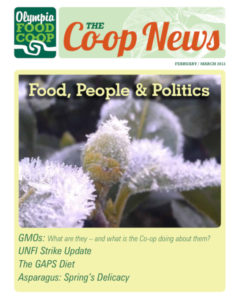