Co-op News February 1981 PDF
PESTICIDES KILL — — EAT ORGANIC
Pesticides are chemicals manufactured for the purpose of killing organisms that interfere with production of commercial crops. They have been used extensively since World War II. Most of them were developed as part of the war effort. Thirty five years later we are in a position to evaluate the effects and implications of a world wide food system becoming increasingly dependent on these chemicals. In this series of articles I will present information on (1) human health issues, (2) land use and environmental issues, and (3) issues of international corporate irresponsibility, all as they relate to pesticide production and use. Accompanying this series is an annotated bibliography of books and other materials available at the Co-op on the politics of food.

It seems pretty clear that pesticides could pose a health problem. But the industry puts a fair amount of effort into obscuring the issue, calling these chemicals “safe as salt” or declaring that some of the same toxic compounds occur naturally, although in what concentrations and under what conditions is never made clear. Besides, the Food and Drug Administration and state agriculture departments are responsible for protecting us by monitoring and restricting pesticide use.

I’ve chosen four basic questions to answer about pesticides and health as a way to examine some of the potential health dangers.

1. Do pesticides used on crops actually end up on the food we eat?

The Food and Drug Administration sets limits on what concentration of pesticides residues is permissible on food sold in the U.S. The enforcement of these policies falls short at several points. Only a third of the pesticides used on raw food are monitored regularly. Many of the pesticides manufactured in the U.S. are not even testable by current Food and Drug Administration methods. Those foods that do get tested for pesticide residues have often been eaten before the tests are completed. Where violations do occur, punishment is infrequent and almost never severe.

Besides coming to us as residues on food plants, some pesticides (as well as other toxins) may be present in meat. This is because some of these chemicals, when used on feed grain, are eaten by livestock and concentrate in the animals’ tissues. As meat by-products and animal waste are more and more being fed back to livestock in various forms, these toxins reach increasingly higher levels of concentration.

2. What happens to pesticides in our bodies?

Twenty five percent of them may cause cancer. Pesticides are designed to suppress metabolism and growth. It is not surprising, therefore, to find them linked with miscarriages and abnormal fetal development. Oil soluble pesticides accumulate in body fat and are discharged into the mild of nursing mothers. In 1977, an Environmental Defense Fund study found that the average mothers’ milk would exceed FDA pesticide safety standards. These are a few of the known physiological effects of pesticides. There may be many other symptoms and side-effects that are never diagnosed as being pesticide-related. Such symptoms might include rashes, headaches, and flu-like symptoms.

3. What happens to the people who have the closest contact with pesticides; the farm workers, production plant workers, packers and so forth?

Clearly, the people who have the closest contact with these chemicals will suffer the greatest effects. The United Nations World Heath Organization estimates that 500,000 people worldwide are killed or incapacitated annually as a result of pesticide use. Most of these people live in developing countries. About one third of the pesticides manufactured in the U.S. are exported. Fifteen percent of them are banned here. In this country, many of the farm workers are undocumented and have no recourse if they are harmed by pesticide contamination. Even among documented workers, there is a poor record for safety standards.

4. How can we avoid consuming pesticide residues?

Eat organically grown food, when eating non organic fresh produce, either peel it or wash it with soap and warm water. These steps will help you keep these toxic chemicals out of your body. They won’t do anything much to affect the ongoing crisis in international agriculture. More on this subject in future segments.

The Co-op clearly marks organically grown foods with this symbol: circle with a dot inside. Farmers who sell us organic produce sign an affidavit stating that they have used no chemical fertilizers or pesticides. 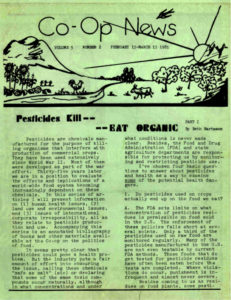