Co-op News Fall 1984 PDF
CO-OP BUILDING REALLY OURS!
The results are in! For those of you who haven’t heard it through the grapevine, WE’VE BOUGHT THE BUILDING—yet another milestone in the Olympia Food Co-op’s history. Thanks to the organized and thorough research of the Building Committee, the decision was a well-informed one.

Information and advisory ballots were posted at the co-op several weeks ago. Of the seventy members who participated in the balloting, all but thirteen were unconditionally in favor of the decision. Twelve members favored the proposition, but voiced some reservations or concerns. One ballot was against the purchase. The committee plans to contact all members who raised questions and who left names and contact numbers on their ballots.

The co-op has been at its current location since 1979, when we grew out of our downtown site at 121 North Columbia Street. With an initial three-year lease, we had an option to purchase before midnight of August 16, 1984. The deadline was extended to allow negotiations to continue.

As part of the purchase agreement, $10,000.00 in rents were to be applied to the purchase price. Consequently, that amount in rent credits would have been lost had the building been vacated, With the building purchase, mortgage, taxes and insurance will increase slightly. The tradeoff here is that the co-op will build up equity which, in the long run, can be used to wield positive, creative economic power in the community.

Speaking of the community, as part of the recent appraisal of the co-op, it was found that the location and its relation to property value is not entirely positive. Although the co-op is in a fully developed and stable neighborhood, its location is not particularly desirable commercially.

Nevertheless, overriding this blemish are four impressive points. First, with the completion of the new hospital, it’s very likely the Westside will expand more rapidly. Second, under the area’s current zoning laws, the building committee feels it wouldn’t be too difficult to attract another business to the site, if we wanted to sell in the future. Third, at its current location, the co-op is accessible by four modes of transportation: bus, car, bike and walking. Most major retail areas are only accessible by two or three. Fourth and most important, when it comes right down to making a choice, most members are satisfied with the North Rogers location. 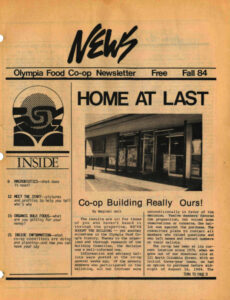