Co-op News December 2014 & January 2015 PDF
A MESSAGE OF GRATITUDE: PHILIPPINE TYPHOON RELIEF ROUND UP UPDATE
Daghang salamat (many thanks) to the Olympia Food Co-op community for raising $1,210 for the Philippine typhoon relief through the round up donation program at the Co-op’s cash registers. This gesture of giving is one of many examples in which the community sustains the Co-op’s mission to “make human effects on the earth and its inhabitants positive and renew¬ing” and the international cooperative principles of “concern for community, solidarity, social responsibility, caring for others, and cooperation among cooperatives” (as stated in our mission statement).

The donations were distributed equally to two Philippine based organizations, COOP NATCCO and GABRIELA, Inc., both of which have been work¬ing hard on developing and providing programs to rebuild infrastructure and morale in the affected communities. In November 2013, super typhoon or tropical cyclone Haiyan (local term Yolanda) struck the central Philippine Islands, leaving behind flattened cities and towns and in its wake affected over 10 million people. Since then, COOP NATCCO (National Confederation of Cooperatives) has been building permanent houses in partnership with other cooperatives in the nation and internationally. Additionally, COOP NATCCO offers the community the following essential programs: the Livelihood Program, Community Workers Empowerment (skill and trade training), Development of Disaster Risk Reduction and Management Plan, and the Program for Children and Youth Survivors. GABRIELA, Inc., a grass-roots based national and international advocacy group for women’s rights and gender equality, has been working closely with women survivors through a psycho-social therapy program, a livelihood program, and fund-raising efforts to build safe refuge/centers for women, etc. Recently, GABRIELA, Inc. organized a gathering of women from all over the world as a way to strengthen global solidarity in response to the climate crisis and its impact on Filipinas and other women worldwide.

As someone who was born from among the affected areas, I am moved by the Olympia Food Co-op community’s solidarity, not only through the round up effort, but also by simply reaching out to Filipinas like me, ask¬ing about my family and community back home. To borrow the words of Filipino climate activist, Yeb Saño: “This outpouring of support proves to us that as a human race, we can unite; that as a species, we care.” (Speech from the United Nations Climate Summit in Warsaw, November 2013) 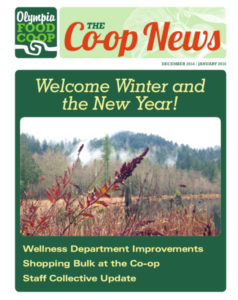