Co-op News December 2013 & January 2014 PDF
STAFF PROFILE: GRACE & HARRY
Grace Cox and Harry Levine are coming up on their 30th anniversaries with the Olympia Food Co-op. Both admit that back in 1984, when they first signed on with the Co-op, they had not planned to make it a career. They were, however, both dedicated to the principles the Co-op was founded upon, and inspired by the values being held at that time by many cooperatives around the country, particularly Olympia Food Co-op. It is clear that Grace and Harry are quite satisfied with the career paths their lives have taken.

As we talked, I became more aware of the extent to which Grace and Harry’s 30 years of service to Olympia Food Co-op has helped to guide direction and maintain the values many Co-op members so appreciate today. Back in the 70’s, they told me, when many food cooperatives were springing up around the country, it was common for them to be formed around issues not only of food source, but also around social and environmental issues. By the 80’s, however, many food co-ops were beginning to shift their focus primarily to issues of financial security and were allowing social justice and even environmental concerns to take a back seat. And as emphasis shifted to better marketing practices, a hierarchical management structure ensued for many co-ops, along with a dropping away of consensus decision making and a volunteer member system. Not so with our Co-op. Both Grace and Harry are proud to say that they were very much a part of insuring that this change did not happen to Olympia Food Co-op.

“There was never any intention,” Harry told me, “to grow just for the sake of growth, for the sake of money or capitalism or the controlling of the marketplace. That value was shared among the staff collective and the membership, to a large extent. The decisions we made around our politics, our values, and our product lines all resonated with our commitment to the staff collective and to our volunteer working member system.” So, while other food co-ops in the northwest were growing and changing their internal structures, the Olympia Food Co-op grew also, yet was allowed to hold to its original vision and values. “We had the same struggle every other co-op in the northwest had around values,” Harry added. “Collectives and working member systems were considered inefficient. We resisted that change because Grace and I were there for the politics. We supported our product line but it wasn’t our motivation. The Olympia Food Co-op went through a substantially different process than all of the other northwest food co-ops at that time. We didn’t argue that working member systems weren’t inefficient. In some ways they are. That wasn’t the issue to us. The issue was the volunteers are members of our community, they’re owners of the Co-op, they get to work in their store, and we all appreciate the social experience. It makes us stronger as an organization.”

Because people in the 80’s were beginning to become aware of the hazards of food produced by mainstream agriculture, with its pesticides and chemical fertilizers, the natural foods industry grew by leaps and bounds. Grace recalled a TV interview with Meryl Streep in which a pesticide for apples was revealed as a health menace. “This pesticide,” Grace recalled, “was showing up in kids’ apple juice and was clearly causing many health problems. As a fluke in timing, we had just purchased our first ever full pallet of a single product and it was gallons of organic apple juice! So Meryl breaks this story and the next day we have what everybody’s looking for to protect the health of their children! We didn’t even have to market it.” Then thinking thoughtfully about this subject of marketing and how other co-ops were using health-threats to market their products, Grace added, “This is another thing about the growth in the industry that we never liked – it’s never resonated with us to do fear based marketing. All we need is more anxiety around what we’re eating. It just makes no sense!”

But even with hesitancy toward mainstream marketing, the Co-op has had what Harry calls “insane growth.” Harkening back to those days, Harry recalled “That year, 1984, our yearly sales were around $500 – 600 thousand. Currently we’re budgeting for $16 million in sales.” Grace laughingly related a story about how, even though the Co-op was growing financially, “For several years, we didn’t want to budget for $1 million because we thought if we did, and didn’t make it, it would be psychologically too hard on us. So, one year we budgeted for $999,999.99. We didn’t want to freak ourselves out.”

Returning to the changes besetting all co-ops in the northwest in the 80’s, Grace added, “The same conversation happened here that happened everywhere else. It just went in a different direction. Over the next couple of years, we set about to build the system so it would support the collective. It came to us that people didn’t actually know how to practice consensus decision making. So, we set about to study it and create that process internal for us, where a lot of other groups would have gone out and hired a general manager.” Nodding in agreement, Harry added, “We’ve been successful using a model that people say doesn’t work.”

Now I understand what Pat Kolstad, fellow Co-oper, meant when she said “I think we should send Harry and Grace to DC to teach our legislators a thing or two about working cooperatively and learning how to compromise. It appears that they need a little training in that area and Harry and Grace are experts at it.” Thanks to Grace and Harry, our Co-op continues to hold to consensus as the most egalitarian process available for decision making, a process many co-ops across the country no longer use.

Grace pointed out that cooperatives can hold a variety of values. Many food co-ops share common economic values, but not all share our strong, deeply held political and social values. Concern for community was only recently added to the Co-op Principles, she told me. Comparing the Olympia Food Co-op to other northwest food co-ops in terms of these values and the use of boycotts as a tool for social justice, Harry mentioned that the Olympia Food Co-op has, throughout the years, “made decisions that no other co-op has made. Most of those decisions, including many product boycotts, have been wildly popular. Until we hit the boycott of Israel. They all came out of evaluating our mission statement and asking ourselves, what is it that we support?” Grace commented that other co-ops use boycotts at times, but “we have had a more consistent practice around boycotts and other social justice issues.”

On a lighter note, we slipped back to 1993. The westside market (Co-op) had reached capacity, and it was time to expand into another storefront. After two years of searching with the expansion committee, Harry found the site that had everything they needed. Not everyone saw his vision, however. “For westside centric members, it was seen as out of town,” Harry said. It had been an RV center with RVs in the parking lot, accessories in the shop and detailing and canopies in the warehouse. Harry and his co coordinator posed as a happy couple shopping for an RV. Excusing himself to use the restroom, Harry cased out the store. Being able to see beyond the ugly building and RV’s, he envisioned a market where our eastside store stands today. Most, however, did not share his vision then, including realtor, Suzanne Shafer, a former Co-op Board member, who shared with me recently her admiration for Harry’s tenacity and creativity as he “created tours for members so that they could see his vision,” adding that “we would not be in that place today if not for Harry.”

The collective made the conscious decision to, as Harry put it, “maintain a low cost structure and do it with as little debt as possible.” Shopping for equipment was done on a shoestring. It was decided that rather than a service counter, the deli should have a salad bar. So, Harry and Grace went shopping. At an auction for a closing Safeway market, they found exactly what they were looking for. Harry left Grace to do the bidding while he attended another auction. Upon his return, Grace told him, “We got it!” “How much?” he asked her. “Twenty-five bucks! Grace exclaimed excitedly. “Was that the opening bid?” “Yea,” she said. Harry, in his east coast bargaining fashion, came back with “Why didn’t you start at $10?” They both laugh now at how, for an initial $25 plus $500 for a rebuilt compressor, they got a salad bar that lasted the Co-op for 18 years! “Everything we bought was refurbished, except for new shelving and a new bulk system. We even got free exterior paint from the City of Portland, which we painted on by hand,” Grace told me.

As for the Co-op’s future, Grace would like to see internal operation practices updated a little more swiftly. She still supports the idea of a downtown store as a potential key feature in the revitalization of Olympia’s urban center, and sees the Co-op further supporting other cooperative businesses. And true to her passion for social justice, Grace would like to see us all become more aware of the plight of those further down the food ladder – all of those who bring us our healthy, produced with integrity food. “As a collective,” she admitted, we are adequately compensated while the people down the production chain from us can’t afford to buy the very food they pick.”

Harry’s vision of the Co-op’s future centers around his own passion for its principles and values. “I want the Co-op,” he said, “to continue to progress and change and grow if we grow, or not grow if we don’t,
but keep the values in our mission statement and our staff values statement.” He feels that, being the biggest cooperative around, the Olympia Food Co-op’s growth has put us in a position to be able to help other local cooperative endeavors, both consumer or worker, either through our own expansion, or by encouraging and supporting others.

Their stories could fill a book, but suffice it to say that Grace and Harry have been on an amazing odyssey through their years with the Olympia Food Co-op. “We’ve had a lot of great parties over the years, and written songs,” said Harry. “And had hysterical laughter,” added Grace, “and epic moments at meetings,” recalling one emotionally heated moment that got defused when Corey, our finances wizard, suggested everyone, “Do the math! When you do the math, the feelings go away.” That motto has moved them since through several difficult moments.

Humor has obviously served Grace and Harry in their lives, both through their work at one politically spicy Co-op, and in their spare moments, writing and performing humor based social justice songs for Citizens Band, where they both play bass; Harry, the guitar, and Grace, the accordion.

Thank you both for your dedication to our Co-op. Your nurturing contribution to its sweet growth and continuing prosperity deserves hearty appreciation from all of us who value our membership at Olympia Food Co-op. 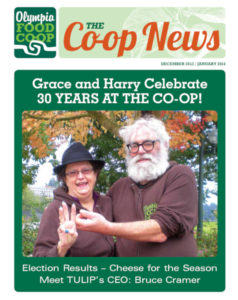