Co-op News December 1977 & January 1978 PDF
AN INVITATION TO BE A FOUNDING MEMBER OF THE COMMUNITY YOU DREAM OF – NOW!
The success of the Food Coop has caused a dream to reawaken within me. It is a dream of co-operative community, one where each person may share in the ownership and management of the sources which supply her/him with daily with daily goods and services. I believe such a community can arise within the Olympia area. I would like to share my ideas on this subject with the hope of others of like mind will join me in planning ways to make this dream a reality in the near future.
Structurally this community would center around a co-operative corporation. People could purchase a membership share in this co-op. The membership would enable them to shop at all stores run by the co-op and receive a reduced rate. The membership would also give them the ability to participate in deciding how the whole community should be run.

To finance this project two avenues are available. They are interrelated and complimentary. First, there would be an initial membership fee of $20 and a yearly renewal of $5. per person. Another aspect of this first part would also be a $30 accumulated cash reserve required from each member. The actual member fees would not be refunded but the cash reserve money could be received back by anyone giving up their co-op membership.

The second part of the community financing comes via establishment of a co-op consumer credit union. Co-op members would be members of the credit union also. They could use it to handle all their banking needs. With money from member deposits and from the co-op cash reserves, the credit union could finance the expansion of the co-operative community.
I see the co-op community concentrating growth in three major areas: retail stores, transportation needs, and community services. The retail stores would be centered mostly on necessity items, such as food, clothing, hardware, and home supplies. However, stores concentrating on personal pleasure items such as books, music, recreation, etc. could also come eventually. Transportation services could include the maintenance of autos and bicycles as well as providing community transportation needs. Purchase of parts and tools could also be included. The services area could include daycare, shelters, and halfway houses, etc. they would have to be financed from the revenues generated from the other co-op operations.

When the co-op community begins our F.O.O.D. co-op would be dissolved into it. I would see the transition occur by giving all present F.O.O.D. Co-op members the option of purchasing co-op community membership at a yearly renewal rate of $5. The F.O.O.D. Co-op assets could be easily transferred to the new organization because of a clause in our bylaws permitting such actions when we dissolve. People who are F.O.O.D. co-op members but who do not wish to become members of the new organizations could have their membership fee refunded.
As said in the beginning of this article the co-op community is just a dream. Yet is it also a very real possibility, within our means even now. What will make it happen is the desire of many people to see it come into being, the dedication and commitment to make it work. I would like to hear from anyone willing to work towards this goal with me. 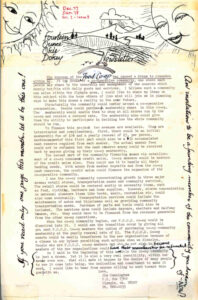