Co-op News August & September 2013 PDF
WHERE DOES THE CO-OP STAND ON GMOS?
Human history is replete with cautionary tales about our interactions with natural systems. From decimating salmon runs to introducing Cane Toads to Australia to dealing with nuclear waste, we often make short term decisions that have long term, negative, unintended consequences. In our increasingly ecologically unbalanced world we believe that environmental conservatism is warranted in the introduction of GMO crops. Here’s why:

While some GMO crops may be beneficial and safe, others have been proven to have unintended effects including: cross pollination with other varietals; the creation of “super weeds” and “super bugs” which have developed resistance to herbicides and pesticides after being repeatedly exposed to them due to the use of herbicide and pesticide resistant GMO crops; and the inability to eradicate some GMO crops once they are introduced (best exemplified by the recent discovery of an experimental GMO wheat strain on an Oregon farm many years after the product was pulled from testing.)

Although some GMO crops likely have beneficial applications, others have been exaggerated. Scientific evidence on the benefits of various GMO crops is contradictory. For instance, although multiple studies carried out by GMO producers have shown that their crops have a higher yield than conventionally bred varieties, newer studies undercut these claims. A recent study in the International Journal of Agricultural Sustainability found that crop yields for corn in America (which produces almost entirely GMO corn) and Europe (which produces almost entirely non GMO corn) were nearly identical for the previous 25 years (1985 – 2010) – or in other words, we haven’t experienced a big bump in yields from going GMO. If the benefits of GMO crops do not outweigh the risks, there is no reason to use them – especially given the issues of corporate control of food that are inherent in their production.

Contrary to GMO producers’ assertions, GMO products have not been “proven to be safe.” In fact, the very idea that “GMOs” are a homogenous category that can be “proven safe” once and for all is unrealistic. GMOs comprise a diverse array of products, some of which probably are safe for people and the environment, others of which are not. For this reason, rigorous scientific testing of new GMO products is required. This testing must include both human health and environmental effects and must include long term studies. Unfortunately, our regulatory system is inadequately equipped to carry out such studies, much less to determine whether individual GMO products are safe and beneficial. The Food and Drug Administration (FDA), which is responsible for “protecting the public health by regulating human and animal drugs, biologics (e.g. vaccines and cellular and gene therapies), medical devices, food and animal feed, cosmetics, and products that emit radiation” is underfunded, subject to political and corporate pressure (under which they have ignored or over-ruled the recommendations of their own scientists), and relies upon studies funded by corporations to determine the safety and efficacy of the very products the corporations wish to sell. (This is just as true, and just as problematic, in studies done by cosmetic companies on their new products as it is for GMO-producing companies.) Thus, although many large organizations have weighed in to say that “no known risks” (to personal health) exist, debate continues in peer-reviewed journals about the overall risks and benefits of many GMO crops. As Nature magazine (a well respected, peer reviewed journal) stated in their May 2013 special section on GMO crops: “Researchers, farmers, activists, and GM seed companies all stridently promote their views, but the scientific data are often inconclusive or contradictory.”

Perhaps most importantly, we believe the people have the right to control their own food systems; GMOs do the opposite. These proprietary crops contribute to the increasing concentration of seed production and economic power in a few multinational corporations, while simultaneously putting undue burden on organic farmers to seek out GMO free seeds and guard against cross pollination. We particularly take issue with pro GMO voices who insist that GMOs are needed to “feed the developing world”, and that those who wish to limit the introduction of GMOs are “elitist”. Many citizens in other countries are having their own debate about the pros and cons of GMO crops. In fact, in 2002 the governments of Malawi, Mozambique, Zambia and Zimbabwe refused to accept food aid from the United States because it included GMO corn. Most importantly, the problem we face with food shortages in our world is due more to our refusal to share food equitably across national boundaries than to a lack of food overall. To claim that corporate controlled GMO crops are needed to solve such shortages is to ignore and exacerbate the systems and inequalities that create these problems in the first place.

For these reasons, and all of those stated previously in this article, the Olympia Food Co-op strongly supports I-522 and urges our members to contribute, volunteer, and vote YES in November’s election. For more on the I-522 campaign 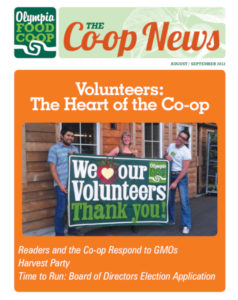